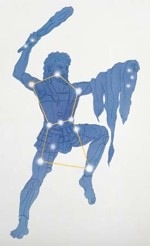 Constellations have always been troublesome things to name. If you give one of them a fanciful name, it will always refuse to live up to it; it will always persist in not resembling the thing it has been named for. Ultimately, to satisfy the public, the fanciful name has to be discarded for a common-sense one, a manifestly descriptive one. The Great Bear remained the Great Bear—and unrecognizable as such—for thousands of years; and people complained about it all the time, and quite properly; but as soon as it became the property of the United States, Congress changed it to the Big Dipper, and now everybody is satisfied, and there is no more talk about riots.

I’ve never been very good at recognizing constellations, and now it occurs to me that the names are probably why. If Pegasus) was known instead as The Box with Things Sticking Out of Two Corners, maybe that part of middle school would have been more effective.