This post is adapted from an assignment for an American intellectual history seminar.

Scott Nearing’s Social Sanity: A Preface to the Book of Social Progress (1913) is a call to arms for the late Progressive Era. Nearing’s primary argument in it aligns with a homily often delivered by one of my high school teachers: “Insanity is doing the same thing and expecting different results.” Sanity, in this case, is defined by the willingness to try something new in terms of social and economic organization. The book is an extended discussion of the proposition that “man” is the master of his domain, and need not be shackled by any so-called laws of the status quo: 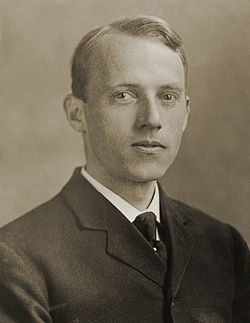 This is a salvo against the economic determinism expressed both in old Social Darwinism and in the informal business culture of the period. It echoes directly Lester Frank Ward’s contention in “Mind as a Social Factor” that “the laissez-faire doctrine is a gospel of inaction, the scientific creed is struck with sterility, the policy of resigning all into the hands of Nature is a surrender.” Although Nearing never makes the connection explicit, he quotes Ward admiringly on several other subjects. (He is quite respectful of science, and so is Ward, the “sterility” remark notwithstanding.)

The question raised in Social Sanity has two components. First, Nearing asks, “is our society sane?” He defines sanity as a tendency toward self-preservation and self-perpetuation, present in individuals and groups. The answer is something like “not quite, but we could be.” The second question is, where is society going? What is the teleological end of a sane society’s progression? This one is never really answered, except in a vague sense of benefit from our increasing mastery over the natural world. In fact, Nearing’s rhetoric often transcends grandiosity to become insipid:

“We are living, breathing, aspiring, believing women and men, standing upright, looking hopefully, fearlessly, into the future. In our beings surges the spirit of the twentieth century—-our century.”

This heartwarming affirmation of human agency is applied to a variety of turn-of-the-century social problems: child labor, income inequality, epidemic disease. In each case the “Spirit of Science” is presented as a solution in ways that to modern readers appear, if not ideal, then at least inoffensive. Nearing also advocates the exploration, if not outright adoption, of socialist ideas and drastic economic reconfiguration. So far, so good.

Much more troubling is Nearing’s advocacy of eugenics. “The right to be well born,” he argues, has as much theoretical validity as any other “natural” right. A sane society, “in its effort to maintain its race standards, would absolutely forbid hereditary defectives to procreate their kind.” This argument is sustained for several pages, and Nearing concludes:

“[A sane society] will ever insist that these three simple rights belong to every member of the race:
1. The right to be well born.
2. The right to a normal childhood.
3. Opportunity for self-preservation and for self-perpetuation.”

The conflict between the first and third of these rights is clear enough in a modern context that any further evidence against this particular case for eugenics is, I hope, unnecessary.

Dedicated “To the Mothers and Fathers of the Super Race,” Nearing’s The Super Race: an American Problem (1912) laid out his eugenic program in more detail than Social Sanity. The “Super Race” was an aggregate form of the “Super Man,” a race possessing the qualities of physical normality, mental capacity, concentration, aggressiveness, sympathy, and vision. As Nearing puts it, eugenics is a sane and progressive social measure: it is “the logical fruition of the progress made in biologic science made during the nineteenth century.” Frances Galton, Herbert Spencer, George Bernard Shaw, are quoted admiringly and without critical effort. Nearing celebrates the ancient tendency of the Greeks to “eliminate unfitness by the destruction of defective children; though we may deplore such a practice in the light of our modern ethical codes, we recognize the end as one essential to race progress.” As for the importance of love in mate-selection:

“Cupid has proved in the past a sad bungler, whose mistakes and failures grimace from every page of our divorce court records… too many men have married a natty Easter bonnet, or a cleverly tailored suit. Too many women have fallen prey to a tempting bank account or a pair of glorious mustachios.”

Better, in Nearing’s opinion, to replace the whole messy process with scientific standards and recommendations.

Perhaps the one redeeming quality of this short and sad book is its advocacy of women’s rights, although those too are framed by the necessity of preserving the male race. “Would you have your sons trained by a free man or by a slave?” Nearing asks, after mentioning some of the limitations placed on women by Christianity, Islam, and Chinese foot-binders. The author has managed to develop a world-view, but not to examine it very closely.

The Making of a Radical: A Political Autobiography 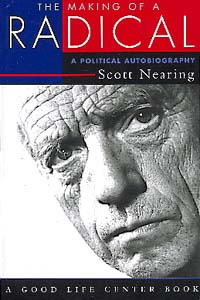 By the time of his autobiography’s publication in 1972, sixty years after The Super Race, Scott Nearing had grown considerably. Compare these two passages, of roughly equivalent content:

“Nature presented an aspect on the rocky, untilled New England coast different from that in the civilized countries of the old world. There was but one way to meet these new conditions—the individual must carve out his own future.” (From The Super Race)

“The early Americans were rugged, vigorous people. There was no Santa Claus to put things in their stockings.” (From The Making of a Radical)

The first attempt is bland and obvious; the second has a charm and directness that approaches Mark Twain, and hints at a larger picture (Coca-Cola, kind parenting, etc.)

{% pullquote %}
At the ripe age of eighty-eight, Nearing had lived through a century of what seemed to him decay and madness. American society had not become saner, it had gone mad with war and capitalism, had come to the brink of collapse and nuclear holocaust. “I am ashamed,” the old socialist wrote, “of any connection with the oligarchy which presently misgoverns, exploits, plunders, and corrupts the United States and the world.” The twentieth century is no longer his; it surges with the spirit of an insane plutocracy. The outbreak of World War I and his expulsion from the faculty of the Wharton School began his political education; the unacceptable dogmatism of the Communist Party continued it, and the aftermath of World War II pushed it underground. {” For the last 40 years of his long life, Nearing lived “off the grid” in rural Vermont and then along the coast of Maine, writing and traveling with his wife Helen while refusing to participate in the market economy even to buy processed food. “}
{% endpullquote %}

After finding the pro-eugenics content of his 1911 and 1913 books fairly disturbing, I expected to see a retraction of that position, or at least a mention of it. No such luck. The word “eugenic” does not appear in The Making of a Radical, neither does any elliptical mention of it, and neither do the titles of Social Sanity or The Super Race, except in a very long list of Nearing’s books appended to the text. At one point, he quite bluntly omits them from a list of the “six books” he put out between 1911 and 1915. Where did eugenics go? Nearing is clearly in possession of his critical faculties and has no trouble remembering the details of his childhood.

The clear implication is that in the decades since his assistant professorship at Wharton, and quite probably immediately after it, he came to his senses and discarded eugenics as a progressive idea. The only people he likes less than the wealthy business and political elite are race-obsessed fascists, and some statements of his new Tolstoyan creed read almost like contrition for condoning eugenics early in his career:

“I will try to persuade my fellow humans, but I will not harm them.”

“Any act which interferes with the life cycle of any other living being or form will have consequences… if I am to act as a thinking being I must consider those consequences.”

“Let each individual… provide support for the old, the sick, and the immature.”

Notwithstanding these noble expressions, the omission of any mention of these two books is jarring. Nearing goes into considerable detail about his political awakening during this period, and his efforts while at Wharton to fight against child labor, but never hints that he once published a book advocating the government sterilization of “defectives.” No doubt Nearing’s ideas and writings about the unfairness of the capitalist system attracted unfriendly attention, as he emphasizes again and again, and led to his abrupt dismissal from Wharton. But I cannot help but wonder if his eugenics program raised eyebrows there too. It is a youthful indiscretion, at least relative to the rest of his life (The Super Race was written at 29; he lived to be 100), but one of the key features of any good political autobiography is a keen sense of when one has been wrong and why. 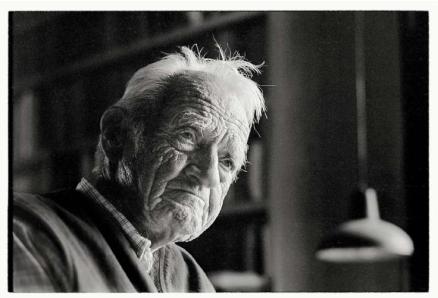 Even if the book is absent from his autobiography, the concept of “social sanity” infuses it. Like many post-World War II writers, Nearing emphasized that the world had gone mad. His retreat to the countryside with Helen “is not an ivory tower retreat. It is an instance and an example of sane living in an insane world… it enables us to live harmlessly in a violent world.” This is social sanity on a different scale: although Nearing works part-time on the lecture circuit to educate others about the decline of western civilization and the necessity of a peaceful socialist revolution, he seems to have accepted that his is not the mainstream view and may never be. “The decline of Roman civilization was gradual. The decline of western civilization has been meteoric. The pluralistic West, drawing upon new sources of energy and equipped with unparalleled techniques of destructivity, had gutted itself in a single generation.” In such a situation, he admits, there is only so much a lifelong teacher can do.

It is a shame that in such a book, brave in many ways, Nearing chose not to face down the mistakes of his youth. Knowing the truth makes his lost cause somehow sadder than it would otherwise be.