This summer, I read and transcribed a lot of California newspapers (Daily Alta California, Sacramento Daily Union, and the S.F. Chronicle) from 1868 and 1856, as part of a research project on 19th–century communication practices at the School of Information. In the course of this reading, I discovered some weird aspects of California history. Here are some of the more light-hearted bits of newspaper culture, not counting the racism, misogyny, and genocidal anti-Indian sentiments of the period…

In 19th century California, the newspaper was the best way to broadcast information. There was no radio, no Craigslist, no YouTube. If you had beef with somebody you put it in the newspaper for all to see. This included marital problems, the most common of which was a man’s wife leaving him for somebody else. (The ratio of men to women in California would not reach .5 until around 1900; in this period, the market was stacked in favor of women.) In all the newspapers I saw, there was at least one classified ad taken out by a disgruntled husband warning everyone not to trust his wife.

THE PUBLIC WILL PLEASE TAKE notice that I will pay no debts contracted by ANNIE F. WILSON, she never being my lawful wife, having a husband living when she married me. 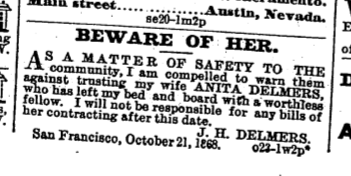 AS A MATTER OF SAFETY TO THE community, I am compelled to warn them against trusting my wife ANITA DELMERS, who has left my bed and board with a worthless fellow. I will not be responsible for any bills of her contracting after this date.

NOTICE—-I hereby caution all persons against harboring or trusting my wife, ANNA WHEELOCK, as I shall pay no debts of her contracting after this date.

Now, to give you an idea of how common this was, those three examples are all ladies whose names start with “A.”

Disgruntled husbands were not the only ones to take out confrontational ads. Here is one from “Professor Quinlan,” who apparently wants to get beat up. I only found one instance of this ad; maybe he got his wish. There were quite a few unhappy gold-miner types around.

CHANCE FOR BUSINESS.—-Professor Quinlan, who has the reputation of being a scientific bruiser, has announced his readiness to punch the head of any pugilist on the Pacific Coast, at the shortest notice, at 132 pounds weight, and give or take four pounds. This looks like business, and if any of the pretended prize fighters who have been laying around of late want a fight, they can get it.

This one just baffles me. Is it an academic prank by one of Quinlan’s colleagues? There’s an Albert P. Quinlan, maybe the “bruiser’s” son, listed here as a graduate of the UC Berkeley Medical Department in 1874, 6 years after this. Here’s another reference to a Professor Quinlan of Dublin. Perhaps his challenge was issued from Dublin and printed here. The mysteries of the past are deep and wide.

What a completely awesome name for a machine. Someday there should be an Aesthetico-Neuralgicon in every home and every pocket. Are you listening, Steve Jobs?

When I saw this one the first time I was like, “no, that can’t be real.” But the Aesthetico-Neuralgicon is a real thing. Here is an article about it (scroll down) from Harper’s Weekly, with illustration. Of course, I doubt it worked.

Speaking of machines, before we heard about Skynet and the Cylons, it seemed like a good idea to mechanize or automate as much of everyday life as possible. Well, let me tell you, it’s a good thing this particular innovation didn’t catch on. When the machines rise up, we’ll be glad that barbers are human. 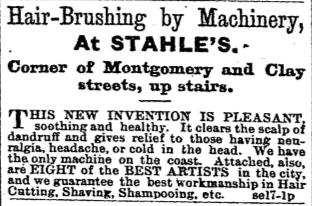 THIS NEW INVENTION IS PLEASANT, soothing and healthy. It clears the scalp of dandruff and gives relief to those having neuralgia, headache, or cold in the head. We have the only machine on the coast. Attached, also, are EIGHT of the BEST ARTISTS in the city, and we guarantee the best workmanship in Hair Cutting, Shaving, Shampooing, etc.

I assume the artists are attached to the shop, not to the hair machine. The confusing part is how this device could also have medicinal properties.

Next time you hear somebody complaining about how text messaging is killing the English language—-I think people still do that—-think back to this charming advertisement from 1868:

Many of the advertisements are for quack medicines, which were sorely appreciated in San Francisco (a mining hub, a densely populated dirty city, and a paradise for germs and STDs). Most of them are relatively unremarkable: take the magic so-and-so pill for rheumatism, consult Dr. Important if you’re suffering from lady problems or spermatorrhea, and so on. But once in a while there is an ad claiming truly exciting powers. One such is this one for Florida Water. 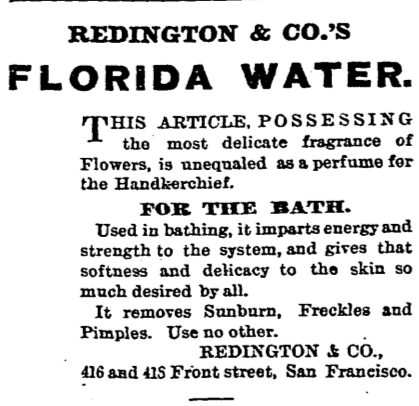 THIS ARTICLE, POSSESSING the most delicate fragrance of Flowers, is unequaled as a perfume for the Handkerchief.

FOR THE BATH. … It removes Sunburn, Freckles and Pimples. Use no other.

Sorry, it removes what? And it smells like flowers?

This would be a great name for a rock band.

GERMAN GIRLS LOOKING FOR SITUAtions will find it to their advantage to leave their address with JAS. F. CROSETT & CO., 230 Sutter street, above Kearney.

This makes sense in context—-it’s an ad for housekeeping work, and Mr. Crosett is a middleman specializing in domestic servants. A “situation” is a job working for a family and living with them; presumably, German immigrants would have wanted someone who spoke their language. There are similar ads with specific ethnic or cultural parameters: “decent Protestant girls” were especially popular.

The Only Living Astrologer

Now here’s a dangerous claim. If you’re an astrologer, I recommend not saying that all other astrologers are frauds. That’s likely to backfire on you. 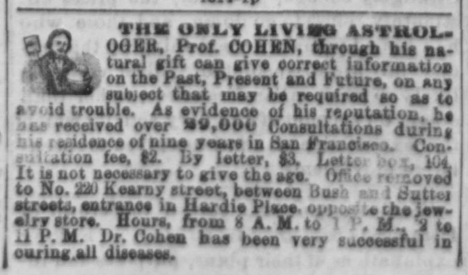 THE ONLY LIVING ASTROLOGER, Prof. COHEN, through his natural gift can give correct information on the Past, Present and Future, on any subject that may be required so as to avoid trouble. As evidence of his reputation, he has received over 29,000 Consultations during his residence of nine years in San Francisco…

Dr. Cohen has been very successful in curing all diseases.

Also, it’s probably unwise to claim that you can cure all diseases. Maybe stick to nervous disorders.

Don’t Be Made A Cripple

Back in the old days, advertisers weren’t afraid to be a little blunter than they are today. 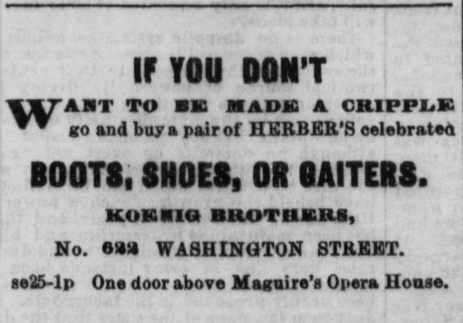 IF YOU DON’T
WANT TO BE MADE A CRIPPLE
go and buy a pair of HERBER’s celebrated
BOOTS, SHOES, OR GAITERS.

To be fair, though, there is a little vagueness there. It’s not exactly clear whether you will be made a cripple by your current inferior shoes, or whether the Koenig brothers are out at night crippling people who don’t buy their shoes.

Here’s a store in downtown San Francisco that specializes in “Mediterranean and California Fruits, Nuts, Candies, Etc.,” and FIREWORKS. And walnuts and raisins as well. 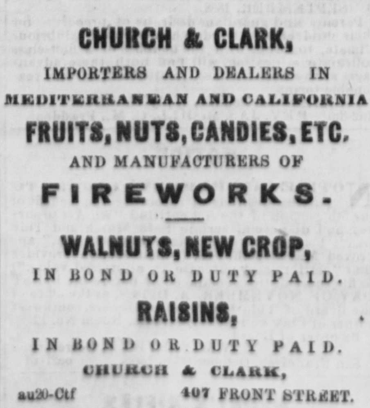 You have to wonder which business model came first. Are Church & Clark nut importers by trade who learned the art of firework-manufacturing in some Chinatown alley one night? Or are they fireworks experts with a cousin well-connected to the Mediterranean nut trade? The mysteries of the past are deep and wide.