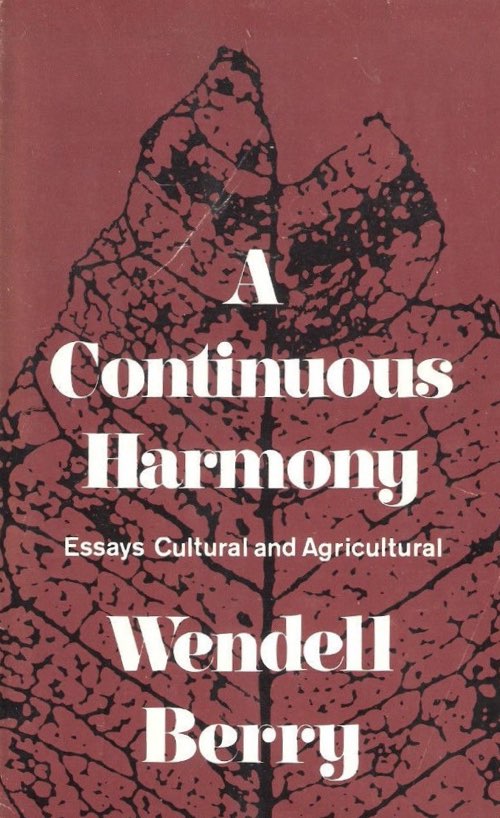 In undertaking to build some sort of integrated family economy on a few acres, mostly steep and mostly neglected, there has been for those reasons and others a good deal of awkwardness and a lot of waste—of effort and time and money. We have invested in the wrong tools and the wrong projects, have become ensnarled in bad plans, have been too slow to recognize the obvious. That is, we often have, not always. But by this awkwardness and this partial success we can see that we have not got to where we are by anything so simple as deciding what we wanted to do and then doing it—as if we had shopped in a display of lives and selected one. We have, instead, in the midst of living and with time passing, been discovering how we want to live, and inventing the ways.p. 54
A better possibility is that the movement to preserve the environment will be seen to be, as I think it has to be, not a digression from the civil rights and peace movements, but the logical culmination of those movements. For I believe that the separation of these three problems is artificial. They have the same cause, and that is the mentality of greed and exploitation. The mentality that exploits and destroys the natural environment is the same that abuses racial and economic minorities, that imposes on young men the tyranny of the military draft, that makes war against peasants and women and children with the indifference of technology.p. 72–73
I believe in American political principles, and I will not sit idly by and see those principles destroyed by sorry practice. I am ashamed and deeply distressed that American government should have become the chief cause of disillusionment with American principles.p. 75
Indeed, our contemporary men of power have introduced in their wake an industry of journalistic commentary and interpretation, because it is so difficult to determine what they have said and whether or not they meant it.
Next: Carol Leifer – How to Succeed in Business Without Really Crying: Lessons from a Life in Comedy
Previous: Robin McKenzie & Craig Kubey – 7 Steps to a Pain-Free Life: How to Rapidly Relieve Back, Neck, and Shoulder Pain