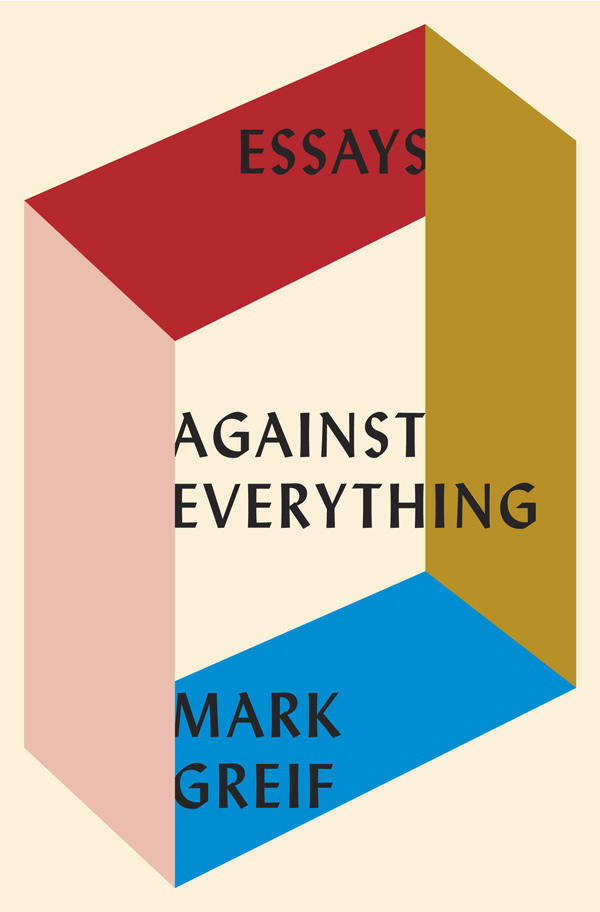 Modern exercise makes you acknowledge the machine operating inside yourself. Nothing can make you believe we harbor nostalgia for factory work but a modern gym.Against Exercise
In the gym you witness people engaging in a basic biological process of self-regulation. All of its related activities reside in the private realm. A question, then, is why exercise doesn’t stay private. It could have belonged at home with other processes it resembles: eating, sleeping, defecating, cleaning, grooming, and masturbating.Against Exercise
In exercise one gets a sense of one’s body as a collection of numbers representing capabilities. The other location where an individual’s numbers attain such talismanic status is the doctor’s office. There is a certain seamlessness between all the places where exercise is done and the sites where people are tested for illnesses, undergo repairs, and die. Against Exercise
Liberation implies freedom to do what you have already been doing or have meant to do. It unbars what is native to you, free in cost and freely your possession, and removes the iron weight of social interdiction. Even in the great phase of full human liberation that extended from the 1960s to the present day, however, what has passed as liberation has often been liberalization. (Marcuse used this distinction.) Liberalization makes for a free traffic in goods formerly regulated and interdicted, creating markets in what you already possess for free. It has a way of making your possessions no longer native to you at the very moment that they’re freed for your enjoyment. Ultimately you no longer know how to possess them, correctly, unless you are following new rules that emerge to dominate the traffic in these goods.Afternoon of the Sex Children
A description of the condition of the late 1990s could go like this: At the turn of the millennium, each individual sat at a meeting point of shouted orders and appeals, the TV, the radio, the phone and cell, the billboard, the airport screen, the inbox, the paper junk mail. Each person discovered that he lived at one knot of a network, existing without his consent, which connected him to any number of recorded voices, written messages, means of broadcast, channels of entertainment, and avenues of choice. It was a culture of broadcast: an indiscriminate seeding, which needed to reach only a very few, covering vast tracts of our consciousness. To make a profit, only one message in ten thousand needed to take root; therefore messages were strewn everywhere. To live in this network felt like something, but surprisingly little in the culture of broadcast itself tried to capture what it felt like. Instead, it kept bringing pictures of an unencumbered, luxurious life, songs of ease and freedom, and technological marvels, which did not feel like the life we lived.Radiohead, or the Philosophy of Pop
Thom Yorke’s voice is the unity on which all the musical aggregations and complexes pivot. You have to imagine the music drawing a series of outlines around him, a house, a tank, the stars of space, or an architecture of almost abstract pipes and tubes, cogs and wheels, ivy and thorns, servers and boards, beams and voids. The music has the feeling of a biomorphic machine in which the voice is alternately trapped and protected.Radiohead, or the Philosophy of Pop
These commentators who have no access to a legislative agenda and really no more exalted basis for political action than that of their ordinary citizenship (but they do not believe they are ordinary citizens) bleat and growl and put themselves on record for various initiatives of Congress over which they have no influence and upon which they will have no effect. To be on record is to be “politically responsible” in that false sense. No rebuke is made to the process of opinionating itself—this ritual of fomenting an opinion on everything, and so justifying the excited self-stimulation of a class of unelected arbiters who don’t respect the citizens within themselves.Gut-Level Legislation, or, Redistribution (The Meaning of Life, Part II)
The threat from those who oppose this line of thought is that, without “incentives,” people will stop working. The worst-case scenario is that tens of thousands of people who hold jobs in finance, corporate management, and the professions (not to mention professional sports and acting) will quit their jobs and end their careers because they did not truly want to be bankers, lawyers, CEOs, actors, ballplayers, et cetera. They were only doing it for the money! Actually they wanted to be high-school teachers, social workers, general practitioners, stay-at-home parents, or criminals and layabouts. Far from this being a tragedy, this would be the greatest single triumph of human emancipation in a century. A small portion of the rich and unhappy would be freed at last from the slavery of jobs that aren’t their life’s work—and all of us would be freed from an insane system.Gut-Level Legislation, or, Redistribution (The Meaning of Life, Part II)
Previous: Your Heart is a Muscle the Size of a Fist by Sunil Yapa
Next: Offshore by Penelope Fitzgerald