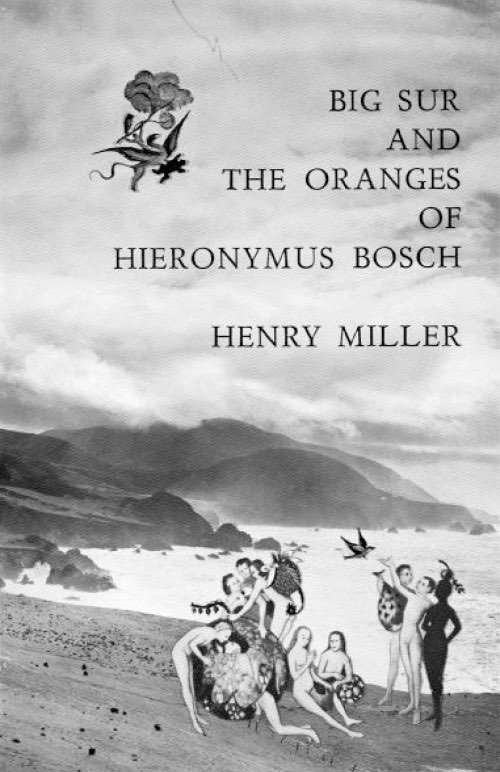 Big Sur and the Oranges of Hieronymus Bosch

Years ago our great American poet Robinson Jeffers began singing of this region in his narrative poems. Jack London and his friend George Stirling made frequent visits to Big Sur in the old days; they came on horseback, all the way from the Valley of the Moon. The general public, however, knew almost nothing of this region until 1937 when the Carmel-San Simeon highway, which skirts the Pacific for a distance of sixty miles or more, was opened up. In fact, until then it was probably one of the least known regions in all America.
Often, when following the trail which meanders over the hills, I pull myself up in an effort to encompass the glory and the grandeur which envelops the whole horizon. Often, when the clouds pile up in the north and the sea is churned with white caps, I say to myself: “This is the California that men dreamed of years ago, this is the Pacific that Balboa looked out on from the Peak of Darien, this is the face of the earth as the Creator intended it to look.”
The world being what it is, I give it as my candid opinion that anyone who knows how to work with his two hands, anyone who is willing to give a fair day’s work for a fair day’s pay, would be better off to abandon his art and settle down to a humdrum life in an out of the way place like this. It may indeed be the highest wisdom to elect to be a nobody in a relative paradise such as this rather than a celebrity in a world which has lost all sense of values.
They behave as if it were a privilege to live here, as if it were by an act of grace they found themselves here. The place itself is so overwhelmingly bigger, greater, than anyone could hope to make it that it engenders a humility and reverence not frequently met with in Americans. There being nothing to improve on in the surroundings, the tendency is to set about improving oneself.
To devote a whole morning to a three-year-old boy full of piss and vinegar is a job for someone with six hands and three pairs of legs.
As for getting any writing done, I dismissed the idea once and for all. Even a writer has first of all to be, and to feel like, a human being. My problem was—to survive. Always I nourished the illusion that someone would turn up to rescue me, someone who loved children and knew how to handle them.
Just to take a walk into the outskirts of Paris—Montrouge, Gentilly, Kremlin-Bicêtre, Ivry—was sufficient to unbalance me for the rest of the day. I enjoyed being unbalanced, derailed, disoriented early in the morning. (The walks I refer to were “constitutionals,” taken before breakfast. My mind free and empty, I was making myself physically and spiritually prepared for long sieges at the machine.) Taking the rue de la Tombe-Issoire, I would head for the outer boulevards, then dive into the outskirts, letting my feet lead me where they would.
It was a trifling incident and, had it been any other man, I would have dismissed it immediately, put it down as a caprice, a foible, an idiosyncrasy, anything but an ominous presage. But of that instant I knew my wife was right, knew that I had made a grave mistake. In that moment I sensed the leech that Anaïs had tried to get rid of. I saw the spoiled child, the man who had never done an honest stroke of work in his life, the destitute individual who was too proud to beg openly but was not above milking a friend dry. I knew it all, felt it all, and already foresaw the end.
Next: Michael Lewis – The Fifth Risk
Previous: Eric Tyson – Investing in Your 20s and 30s for Dummies