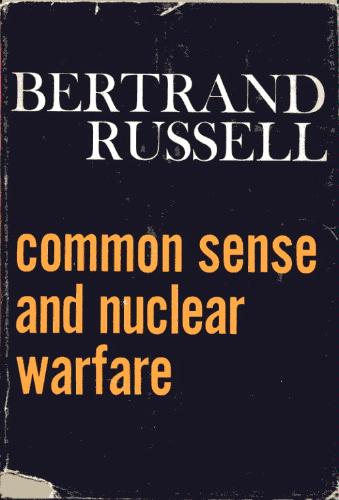 In reading of the plans of militarists, I try very hard to divest myself for the time being of the emotions of horror and disgust. But when I read of plans to defile the heavens by the petty squabbles of the animated lumps that disgrace a certain planet, I cannot but feel that the men who make these plans are guilty of a kind of impiety.p. 19
Our planet cannot persist on its present courses. There may be war, as a result of which all or nearly all will perish. If there is not war, there may be assaults on heavenly bodies, and it may well happen that means will be found to cause them to disintegrate. The moon may split and crumble and melt. Poisonous fragments may fall on Moscow and Washington or on more innocent regions. Hate and destructiveness, having become cosmic, will spread madness beyond its present terrestrial confines. I hope, though with much doubt, that some gleams of sanity may yet shine in the minds of statesmen. But the spread of power without wisdom is utterly terrifying, and I cannot much blame those who it reduces to despair.p. 20
This is a policy adapted from a sport which, I am told, is practised by some youthful degenerates. This sport is called 'Chicken!' It is played by choosing a long straight road with a white line down the middle and starting two very fast cars towards each other from opposite ends... As played by irresponsible boys, this game is considered decadent and immoral, though only the lives of the players are risked. But when the game is played by eminent statesmen, who risk not only their own lives but those of many hundreds of millions of human beings, it is thought on both sides that the statesmen on one side are displaying a high degree of wisdom and courage, and only the statesmen on the other side are reprehensible. This, of course, is absurd.p. 30
Next: David Graeber – Debt: The First 5,000 Years
Previous: Chade-Meng Tan – Search Inside Yourself: The Unexpected Path to Achieving Success, Happiness (and World Peace)