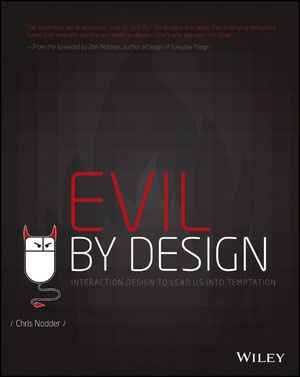 Evil by Design: Interaction Design to Lead Us into Temptation

People who create bad designs because they don’t know any better or because they are lazy aren’t being evil. Evil design must be intentional. In fact, as you’ll see in the various chapters, there is often a lot of planning involved in creating an evil design that truly works.
…Evil design is that which creates purposefully designed interfaces that make users emotionally involved in doing something that benefits the designer more than them.
[Stanley Milgram] had a paid helper stand on a busy sidewalk and look up at the (empty) sky. He noted that approximately 40 percent of people passing would also look up. With two confederates, that number rose to 60 percent. When he paid four people to stand together and look up, around 80 percent of people passing would also look up.
This light switch just cries out to be “aligned,” which then turns off the associated light. It was created to demonstrate easy ways in which people can be encouraged to save power. It is part of the AWARE project, by Loove Broms and Karin Ehrnberger at the Interactive Institute in Stockholm.
To add encouragement, LinkedIn uses language that makes it clear that you are currently in a disorderly state. Claiming “your profile is 25% complete” creates enough disharmony to convince people to hand over their e-mail address book, add more connections, and start recommending others in the network.
If you are caught doing bad things with user data, apologize profusely and then add more check boxes, explanations, and options to your privacy center, so it’s even harder to divine the correct settings.
Clever marketing embraces both aspiration and scorn.
The Seattle Seahawks foster in-group feelings from their fans by officially recognizing them as “The 12th Man” (on a team of 11 players). Reading the in-group community forum pages at seahawks.net shows plenty of the disinhibition and adoption of the group’s views that often goes along with feelings of in-group membership. In return, by feeling like they are part of the team, fans are more likely to embrace the behaviors of the team, including dressing like them (with items conveniently available from the team’s store), and engaging in Seattle’s notorious high crowd noise levels to confuse and intimidate the opposing team.
Amazon.com first started offering year-round free shipping on purchases of $99 or more in 2002. By the end of that year, it had reduced the trigger point to $49. In 2003, it reduced it again to $25. At this time, the company stopped running print and TV ads, and put the money it would have spent on advertising into free shipping instead because it saw better returns from the goodwill of free shipping than it did from a 16-month study into the benefits of TV advertising.
As Bertrand Russell said, "One of the painful things about our time is that those who feel certainty are stupid, and those with any imagination and understanding are filled with doubt and indecision."
In other words, giving people pseudo-control in where they place their chips, or how they play their cards gives them a level of perceived mastery over the randomness. At its most basic, this is the difference between pushing a button to see if you’ve won and choosing the correct one of two buttons to win. Giving people choices, and making them take an action, gives them pseudo-control.
The industry term for the dollar value of unredeemed prepaid items is breakage. Breakage is big business for retailers who offer gift cards. In 2011, the electronics retailer BestBuy reported $53 million in income on the value of unredeemed gift cards. Estimates suggest that anywhere from 10 percent to 19 percent of card balances go unredeemed, for a total of approximately $41 billion dollars in the period from 2005 to 2011.
Next: Sarah Vowell – Assassination Vacation
Previous: Alan Bartram – Five Hundred Years of Book Design