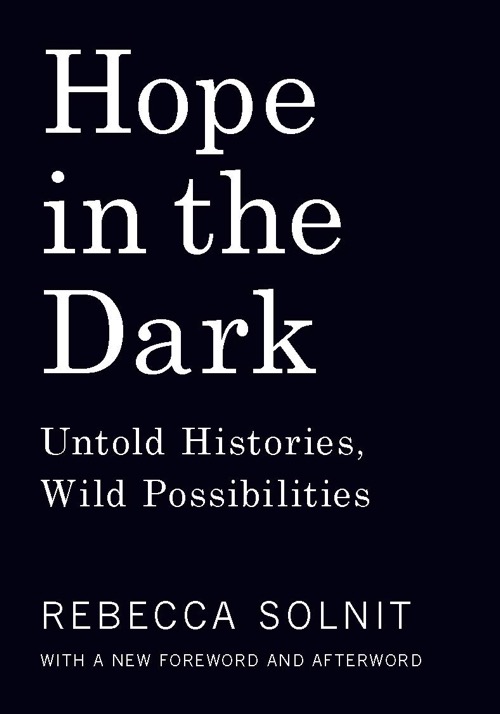 Hope locates itself in the premises that we don’t know what will happen and that in the spaciousness of uncertainty is room to act. When you recognize uncertainty, you recognize that you may be able to influence the outcomes—you alone or you in concert with a few dozen or several million others.
In a way, capitalism is an ongoing disaster anticapitalism alleviates, like a mother cleaning up after her child’s messes (or, to extend the analogy, sometimes disciplining that child to clean up after itself, through legislation or protest, or preventing some of the messes in the first place, and it might be worth adding that noncapitalist ways of doing things are much older than free-market economic arrangements).
We write history with our feet and with our presence and our collective voice and vision. And yet, and of course, everything in the mainstream media suggests that popular resistance is ridiculous, pointless, or criminal, unless it is far away, was long ago, or, ideally, both. These are the forces that prefer the giant remain asleep.
At the same time, the peace movement that erupted so spectacularly in 2003 accomplished some significant things that need to be recognized. We will likely never know, but it seems that the Bush administration decided against the “shock and awe” saturation bombing of Baghdad because we made it clear that the cost in world opinion and civil unrest would be too high. We millions may have saved a few thousand or a few tens of thousands of lives. The global debate about the war delayed it for months, months that perhaps gave many Iraqis time to lay in stores, evacuate, brace for the onslaught.
It seemed like one of those ideas that might be migrating toward the center, but in ten years if Time magazine is questioning the shift from democracy to a sort of monarchy of corporations or the New York Times is reporting the overturning of the legal principles on which corporate hegemony rests, they won’t thank a bunch of radical professors or scruffy anticapitalist street activists who were being tear-gassed for arguing the point prematurely. There will never be a moment when someone in the Senate or on national TV news will say, “Those freaks in the underbrush saw the future when we on high were blind.” Instead, the perils of corporate personhood will become common sense, become what everyone always knew. Which is to say, stories migrate secretly. The assumption that whatever we now believe is just common sense, or what we always knew, is a way to save face. It’s also a way to forget the power of a story and of a storyteller, the power in the margins, and the potential for change.
Moths and other nocturnal insects navigate by the moon and stars. Those heavenly bodies are useful for them to find their way, even though they never get far from the surface of the earth. But lightbulbs and candles send them astray; they fly into the heat or the flame and die. For these creatures, to arrive is a calamity. When activists mistake heaven for some goal at which they must arrive, rather than an idea to navigate Earth by, they burn themselves out, or they set up a totalitarian utopia in which others are burned in the flames. Don’t mistake a lightbulb for the moon, and don’t believe that the moon is useless unless we land on it. After all those millennia of poetry about the moon, nothing was more prosaic than the guys in space suits stomping around on the moon with their flags and golf clubs thirty-something years ago. The moon is profound except when we land on it.
“The future is dark, which is on the whole, the best thing the future can be, I think,” said Virginia Woolf in the midst of the First World War, a war in which millions of young men died horribly. They died, but not everything did. Woolf committed suicide during the next war, but before that she created a body of work of extraordinary beauty and power, power put to use by women to liberate themselves in the years after Woolf was gone, beauty still setting minds on fire.
Next: Rachel Cusk – Coventry: Essays
Previous: Per Petterson – Out Stealing Horses