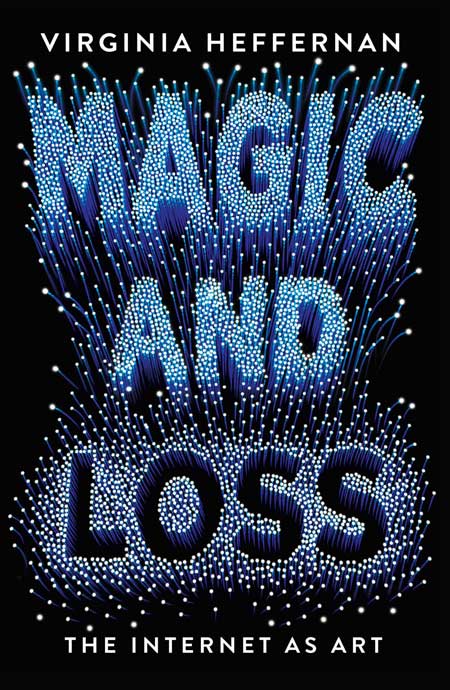 Magic & Loss: The Internet as Art

Most important of all, I learned, as a novelist does, to create an avatar in digital space who is simultaneously flawed, dignified, and realistic—but who can also field trolls and take sniper fire for me and thus keep the real me, my soul, entirely aloof and safe.
“Debugging,” according to the educational theorist (and notable dyslexic) Cathy N. Davidson in Now You See It, is actually an agricultural skill that may even be at odds with traditional literacy. It allows farmers to look at a field of alfalfa and see that three stalks are growing wrong and the fertilization scheme must be adjusted.
Shrewd digital readers build defenses against reading and strenuously resist hyperlexia as the plague of our time. It’s hyperlexia that keeps people’s eyes fixed on their phones and not on nature, art, friends, mates, children, or work. And it’s hyperlexia that leads to fatalities in driving-while-texting accidents. We have become so compulsively unwilling to stop reading (Facebook, Tinder, WhatsApp) that we will risk our lives, livelihoods, and certainly marriages to keep at it. At the same time, curiously, the keepers of the canon of media—books, magazines, newspapers—are hesitant to legitimize digital reading and often blind themselves to it. To that crowd, what hundreds of millions of us do with near-murderous ardor frequently doesn’t even register as reading.
(As night follows day the shortness of tweets conjures the standing sophistry around our “attention span,” an occult feature of the mind that in theory is as fixed as a boxer’s reach. But the attention span is always invoked as a thing deformed and on closer examination surely does not exist, except as always already julienned.)
A gadget tied to Amazon that offered retreat from the Internet? It was simple: that first Kindle, unlike the other devices I carried, didn’t pulse with clocks, blaze with video, or squall with incoming bulletins and demands. Instead it was reserved, with something on a continuum with a stone’s integrity and self-reliance. Exiled from the sparkling crisscross of fiber optics and infinite cybernet works, the Kindle was almost like a book. Thus the Kindle protests the Internet, as the App Store protests the web. Technology in productive tension with other technology has a special pleasure to it.
As Michael Pollan memorably chronicled in his book The Omnivore’s Dilemma, America in the age of rye surplus used to be a nation of drunks, then the overproduction of corn turned us into overeaters. I’d add that, as words have proliferated hypertrophically on the Internet, we’ve become a population of overreaders, of hyperlexics.
If the concepts or style of a book baffles you, nothing in the Kindle design condescends to soothe your feelings. If your attention wanders during a dull passage, by contrast, there are no videos to divert you. A sustained encounter with a book on the Kindle is a suitably demanding cerebral event.
As Walter Benjamin put it, the best way to acquire a book is to write it yourself. It’s also the fanciest way. Many writers—myself included, if I’m honest—are perfectly happy to read ebooks and don’t care if the whole Western canon goes digital, but we want our own books Moroccan-bound on good paper in a nice Garamond typeface, engraved, ideally. And naturally produced in vast, vast quantities and then lovingly shelved in venerable libraries. Funnily enough, self-publishers (authors) seem willing to pay for all this—to hire editors and designers and publishers to produce print runs of the books they write.
As I discovered over the years watching every manner of shock video, curio, and display of virtuosity, the first proper response to a great YouTube video is “Holy shit!” And the second is “This is a fake!”

Television, after all, is a vast wasteland. Newton Minow, the FCC chair, had called it that fully fifty years ago. He had issued a curse on the whole medium when he said it, but also a challenge. At least that’s how I came to see it: TV, and then digital video, has to operate under the sign of disreputability.

As I told Mr. Minow when I met him on a panel at Northwestern, the best thing anyone has ever done for television was to curse it, right then, right at the start. He put TV under a moral cloud, and its efforts to burn off the cloud—but also to wickedly enshroud itself, like Huckleberry Finn saying, “All right, then, I’ll go to hell”—is what has made TV the great medium of our time.

Workers and soldiers have long used them to mute the din of machinery or artillery while receiving one-way orders from someone with a microphone. From the beginning headphones were a technology of submission (to commands) and denial (of commotion). When World War II ended, submission-and-denial was exactly what returning veterans craved when they found themselves surrounded by the clamor and demands of the open-plan family rooms of the postwar suburbs. By then they knew what device provided it. In the 1950s, when Jobs was a boy, John C. Koss invented a set of stereo headphones designed explicitly for personal music consumption. In that decade, according to Keir Keightley, a professor of media studies at the University of Western Ontario, middle-class men began shutting out their families by using giant headphones and hi-fi equipment that recalled wartime sonar systems.
Make your private life beautiful and your public life humane, [Richard Rorty] taught us. This coherent approach to—to—life itself Rorty rigorously justified in his many books. I believe he argued it most simply and persuasively in the opening chapters of Contingency, Irony, and Solidarity, as well as in his personal essay “Trotsky and the Wild Orchids” and his lecture on Irving Howe.
Next: Dan Cederholm – Sass for Web Designers
Previous: Joe Hill – The Fireman