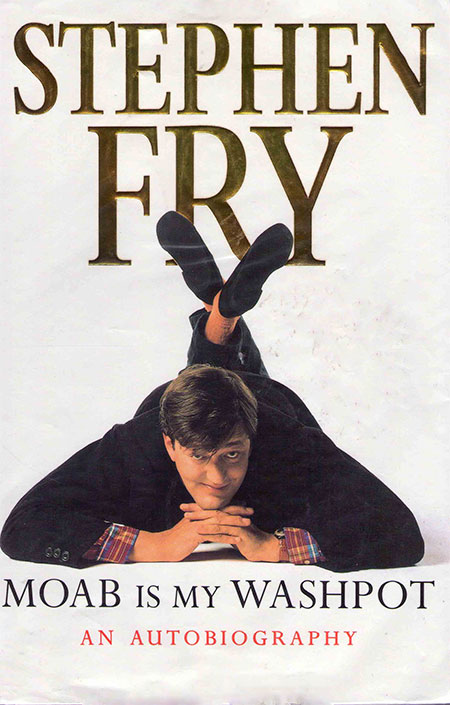 Moab is My Washpot

No one in life, not the wartiest old dame in Arles, not the wrinkledest, stoopingest Cossack, not the pony-tailedest, venerablest old Mandarin in China, not Methuselah himself, will ever be older than a group of seniors at school. They are like Victorian photographs of sporting teams. No matter how much more advanced in years you are now than the age of those in the photograph, they will always look a world older, always seem more capable of growing a bigger moustache and holding more alcohol. The sophistication with which they sit and the air of maturity they give off is unmatchable by you. Ever.
Her maiden name was Grabscheidt, pronounced, I fear, grab-shite.
In a prep school set in the country, in love with the country, inspired by the country and dedicated to the country, the boy who fears the country, fears it in all its manifestations, naturally becomes something of a loner: if his home life is also spent in even deeper country he has a problem.
It’s not all bad. Heightened self-consciousness, apartness, an inability to join in, physical shame and self-loathing—they are not all bad. Those devils have also been my angels. Without them I would never have disappeared into language, literature, the mind, laughter and all the mad intensities that made and unmade me.
Uppingham School has very few alumni of whom it can boast in terms of that fell whore, Fame.
Sydney Smith, in case you don’t know him, is well worth discovering; he had a unique brand of at once sophisticated, surreal and good-natured wit: he said, for example, of meeting Daniel Webster that he struck him as “much like a steam engine in trousers” and was overheard telling a woman at a dinner party “Madam, I have been looking for a person who disliked gravy all my life; let us swear eternal friendship.”
Prep school is, it goes without saying, no kind of preparation at all for public school, any more than school is a preparation for life. The alteration in scale, the sudden descent from seniority to absolute insignificance, these make any social lessons learnt worse than useless. Those whose early days at public school were least happy were those who had won most prizes, rank and power at their preps.
I should have known better, it was a Tuesday in February. Many of my life’s most awful moments have taken place on Tuesdays, and what is February if not the Tuesday of the year?
I knew that the past was a foreign country, and knew too that it followed logically that the future must be abroad; in other words I knew that it was my destiny to become a foreigner, a stranger to myself. I was passionately patriotic about my own age, a fierce believer in the rightness and justness of adolescence, the clarity of its vision, the unfathomable depths and insurmountable heights of its despair and its joy. The colours that shone and vibrated so strongly through its eyes were the true colours of life, this I knew. Because I had read a great deal I knew as well that one day I would see things in different colours, take up citizenship in a different country, the country of the adult, and I hated my future self because of it. I wanted to stay behind in adolescence and fight for its rights and I knew that the moment I left it I would care only for the rights of my new age, my adulthood with all its falsities and failures.
I’ve said it before in interviews and it’s been taken as a witty joke, but life in prison was a breeze for me, because at that point I had spent most of life at boarding school. I didn’t mean to suggest by that, as was supposed, that boarding schools are like prisons, I meant that prisons are like boarding schools.
Next: Aziz Ansari and Eric Klinenberg – Modern Romance
Previous: John Darnielle – Wolf in White Van