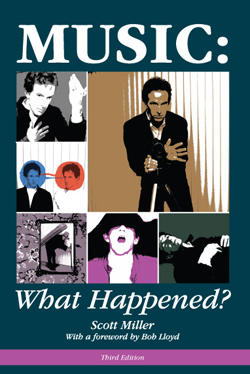 An annotated set of mixtapes: Scott Miller’s choices of the best (or most representative) songs for every year from 1957 to 2011. I gradually recognized fewer and fewer songs as the 2000s approached, but Miller knows a hell of a lot about music and it’s entertaining to read him describing even the songs I didn’t know anything about. Kind of like going to a record store to eavesdrop on the employees.

The passage from a variety show world to a reality show world entails the corollary that we’ve entered an era where there is actually far less demand to see a top singer perform on TV than there is to see amateurs audition for a chance to participate in the star-making machinery that would theoretically result in that aforementioned TV appearance. For which there is almost no actual demand. And people wonder why the economy’s collapsing.
It’s the sensitive introverts who always think they will somehow rise like cream the day all of society’s silly rules and regulations go away.
Seeing as this is the best R.E.M. song in a decade’s diameter, I think the lesson for us all is: if you write one of the best songs of the year, just take the bullet. The chorus of “That’s cinnamon, that’s Hollywood, come on, come on” makes an indelible impression, and the way I’ve seen Stipe do it live is great: he sings some lower part that isn’t quite as good the first few times, as if to say sorry, my voice just won’t do the part that was on the record, then nails the regular high part the last few times. Kind of like James Brown throwing off the cape and running back to the mike.
For a song to mean even more business than “Jokerman” is remarkable.
The Italian poet from the 13th century has to be Dante, right? “Pouring off of every page like it was written in my soul, from me to you” is spectacularly good writing. First, no one thinks of describing literary passion in a pop song; second, even if they thought of it, no one who attempted it would be any good at it except Bob. This was the first inkling I had that he was for real in a way that was probably unique within the whole generation, and I was helped along by the fact that it’s a very forthcoming and lovingly crafted record. But what did the girl in the topless place hand him, La Vita Nuova? Or the Inferno?
A lot of coats of unreality have been sanded and stripped off when we meet the Bob Dylan of Love and Theft and “Mississippi.” No struggle, game, or “power of expression” is ever going to be so decisively resolved as to end struggling, but details of human relationships once small in the scheme of means-to-ends are now in sharp focus: “My ship’s been split to splinters and it's sinking fast/…But my heart is not weary, it’s light and it’s free/I’ve got nothin’ but affection for all those who've sailed with me.”
In a way, the Cars operated as if they were making cars. The model for the new year was clearly based on the model for the previous year, with a few adjustments clearly designed to account for recent trends.
Next: Matt Linderman and Jason Fried – Defensive Design for the Web
Previous: Edward Tufte – Beautiful Evidence