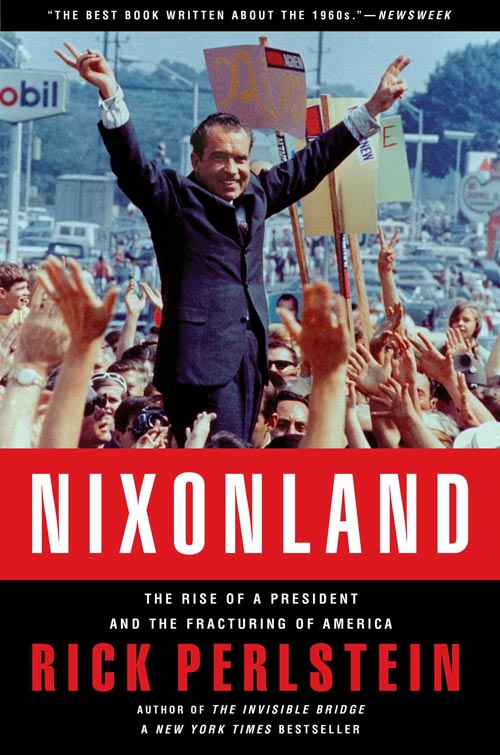 Nixonland: The Rise of a President and the Fracturing of America

Thus a more inclusive definition of Nixonland: it is the America where two separate and irreconcilable sets of apocalyptic fears coexist in the minds of two separate and irreconcilable groups of Americans.
The crusade began in January with a speech to the white-gloved ladies of the Women’s National Republican Club at the Waldorf-Astoria (how he hated speaking to women’s groups: “I will not go and talk to those shitty ass old ladies!” [Nixon] once said).
“If we can’t sit at the table,” SNCC executive director James Forman had said at a 1965 mass meeting in Montgomery, “let’s knock the fucking legs off.”
Garment remembered Nixon baring his soul at the conclusion. He “said he felt his life had to be dedicated to great foreign policy purposes. This man, fiercely determined to stay in the political life for which he was in many ways so ill suited, told me he felt driven to do so not by the rivalries or ideological commitments or domestic politics but by his pacifist mother’s idealism and the profound importance of foreign affairs.” It was the deepest thing Nixon possessed: this passion to play the game of statecraft from the only seat that mattered—the captain’s. The one solid thing that lay behind all the poker player’s feints, blinds, bluffs. It was why he stayed in the game.
The soldiers had flown in [to Vietnam] at the start of their tours on commercial airliners; avoiding the spectacle of fleets and fleets of troop transports was one of the ways the government disguised and sanitized the scale of the American buildup.
This was the confirmation: the Democrats were utterly without hope on Tuesday. Experienced observers had long ago learned to read the president’s [Lyndon Johnson's] entrails like Greek oracles, seeking in his changing medical humors clues to his political fears. Whenever they were harshest, some genuinely debilitating psychosomatic illness always seemed to be popping up. On the eve of his first Senate election, when he won by the stolen votes of a single precinct, it was a kidney stone. There was another kidney stone in 1955, a heart attack later that same year. This time the procedure looked suspiciously elective. “It’s not an emergency in any way,” military surgeon George G. Burkley told the press after the president withdrew—just some routine maintenance of a protrusion that “has enlarged somewhat in the last three weeks,” which “indicates against a weekend trip.” What also indicated against a weekend trip, of course, was the necessity of avoiding presidential association with a bloodbath of a congressional election. He was always coming down with symptoms like these when no choice was a good choice.
“What are you doing with the guns?” a patrolman would ask them, a little afraid. “What are you doing with your gun?” Huey Newton would shoot back, and pull out one of the law books he always carried with him as others stood by with cameras and tape recorders. Huey would step out of his car and snap a live round into his chamber: California law only outlawed the carrying of loaded weapons inside a motor vehicle. The cops would slink; the Panthers would call them “pigs”—another fruit of Newton and Seale’s research: it wasn’t an obscenity, so you couldn’t be arrested for it.
As Tom Hayden once said of liberal college administrators, “Listening to them is like being beaten to death with a warm sponge.”
Next: George Packer – The Unwinding: An Inner History of the New America
Previous: David Kinney – The Dylanologists: Adventures in the Land of Bob