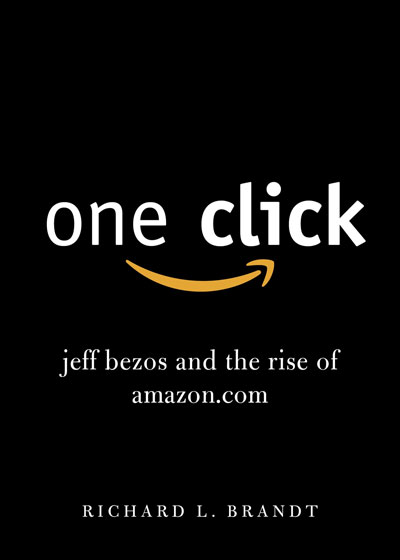 One Click: Jeff Bezos and the Rise of Amazon.com

Plus, it reminded Kaphan of an enjoyable, although brief, time he had spent in 1970 working for Stewart Brand’s Whole Earth Truck Store, precursor of the Whole Earth Catalog. “I saw Amazon’s mission as a continuation of certain aspects of that same mission: to supply hard to find tools (mainly information-based tools) to a far-flung clientele who might not have easy access to those tools in their local communities,” he says.
Bezos also had to decide what to call the company. He would need a name if he was going to incorporate a business. On his drive west, he called a Seattle attorney whom Hanauer had recommended, Todd Tarbert, to incorporate the company, and told him the name was to be “Cadabra, Inc.,” a play on the magician’s chant of “abracadabra.” It was apparent that name was a problem when Tarbert asked, “Cadaver?”
It cost them $890 a month. He chose it in part because it had one crucial requirement—a garage, so that Jeff could boast of having a garage start-up like Silicon Valley legends from Hewlett-Packard on. The garage had actually been converted into a recreation room, but Jeff figured it was close enough. “We thought it was important for that garage start-up legitimacy,” he said.
It also seems to fit the prediction that Bezos made in 1998, when he promised that Amazon would not destroy the local bookstore. “I still buy half of my books at bookstores,” he said. “Sometimes I want the book right now, not tomorrow. Sometimes I just like to get out of the office and go to a nice environment. What you’re going to see—and it’s happening already—is that physical bookstores will become ever-nicer places to be. They are going to have more sofas, better lattes, nicer people working there. Good bookstores are the community centers of the late 20th century. That’s the basis on which they’re going to compete. There is plenty of room for everyone.”
“We are not profitable,” he told The New York Times in January 1997. “We could be. It would be the easiest thing in the world to be profitable. It would also be the dumbest. We are taking what might be profits and reinvesting them in the future of the business. It would literally be the stupidest decision any management team could make to make Amazon.com profitable right now.”
Greg Linden, for example, a programmer who joined Amazon in February 1997, found a better way to parse out similar tastes in books in order to make recommendations to customers. Amazon would recommend books to a customer that were bought by other customers with similar buying patterns. On his blog about his days at Amazon, he recalls that when his program went live on the site, “Jeff Bezos walked into my office and literally bowed before me. On his knees, he chanted, ‘I am not worthy, I am not worthy.’”
Seven months later Jeff chose Amazon for a new name because it began with an A, would come up high in any alphabetical listings, and because, as the world’s largest river, it reflected his ambitions for his company. Plus, it was easy to spell. “One of the things that people don’t think about but is really important is that online, you get to places by being able to spell their name,” he noted. But he insisted it always be referred to as “Amazon.com” to show that it was a new breed of business.
More importantly, he had the self-confidence of Muhammad Ali, the enthusiasm of John Kennedy, and the brains of Thomas Edison. He had what was needed to persuade others to join him in his bold new quest.Barf.
In October 2009, blogger John Walkenbach graphed the declining price of the Kindle, and noticed it was on a straight-line trajectory that pointed to zero in the second half of 2011. Author and blogger Kevin Kelly asked Bezos about that trend line in August 2010. Bezos smiled and said, “Oh, you noticed that.” And then smiled again.
Next: Peter Carey – Parrot & Olivier in America
Previous: Chris Vander Mey – Shipping Greatness: Practical lessons on building and launching outstanding software, learned on the job at Google and Amazon