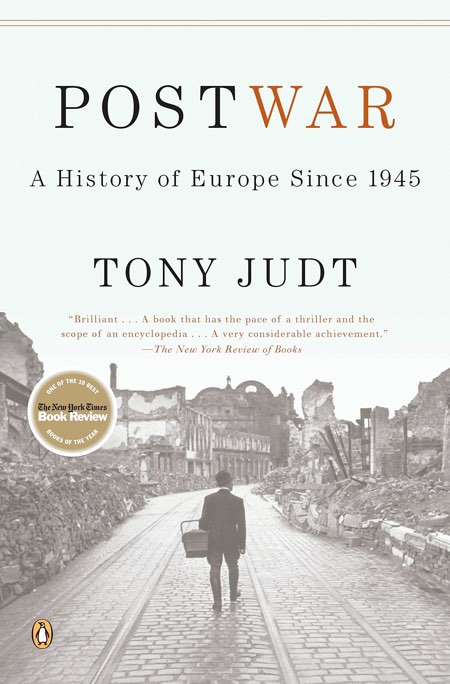 Postwar: A History of Europe since 1945

The most obvious economic impact of the war was on housing stock. The damage to London, where three and a half million homes in the metropolitan area were destroyed, was greater than that wrought by the Great Fire of 1666. Ninety percent of all homes in Warsaw were destroyed. Only 27 percent of the residential buildings in Budapest in 1945 were habitable. Forty percent of German housing stock was gone, 30 percent of British, 20 percent of French. In Italy 1.2 million homes were destroyed, mostly in cities of 50,000 or more people.
It is easy, in retrospect, to see that hopes for a democratic Eastern Europe after 1945 were always forlorn. Central and Eastern Europe had few indigenous democratic or liberal traditions. The inter-war regimes in this part of Europe had been corrupt, authoritarian and in some cases murderous. The old ruling castes were frequently venal. The real governing class in inter-war Eastern Europe was the bureaucracy, recruited from the same social groups who would furnish the administrative cadre of the Communist states. For all the rhetoric of ‘Socialism’, the transition from authoritarian backwardness to Communist ‘popular democracy’ was a short move and an easy one. It is not so very surprising that history took the turn it did.
Where Stalin differed from other empire-builders, even the czars, was in his insistence upon reproducing in the territories under his control forms of government and society identical to those of the Soviet Union. Just as he had done in eastern Poland between 1939 and 1941, and in the Baltic states in 1940 and again (following their re-conquest from the Nazis) in 1945, Stalin set out to re-mould eastern Europe in the Soviet image; to reproduce Soviet history, institutions and practices in each of the little states now controlled by Communist parties.
The advantage of the confession, in addition to its symbolic use as an exercise in guilt-transferal, was that it confirmed Communist doctrine. There were no disagreements in Stalin’s universe, only heresies; no critics, only enemies; no errors, only crimes.
The Communist state was in a permanent condition of undeclared war against its own citizens. Like Lenin, Stalin understood the need for enemies, and it was in the logic of the Stalinist state that it was constantly mobilizing against its foes—external, but above all domestic.
The idea that the Soviet Union was engaged upon a momentous quest whose very ambition justified and excused its shortcomings was uniquely attractive to rationalist intellectuals. The besetting sin of Fascism had been its parochial objectives. But Communism was directed towards impeccably universal and transcendent goals. Its crimes were excused by many non-Communist observers as the cost, so to speak, of doing business with History.
[Margaret] Thatcher was a radical, bent upon destruction and innovation; she scorned compromise. For her, class warfare, suitably updated, was the very stuff of politics. Her policies, often dreamed up at very short notice, were secondary to her goals; and these in turn were in large measure a function of her style. Thatcherism was about how you govern, rather than what you do. Her unfortunate Conservative successors, cast out upon the blasted landscape of post-Thatcherism, had no policies, no goals—and no style.
Yugoslavia was the worst case, but post-Communism was difficult everywhere. The path from authoritarianism to democracy in Portugal or Spain accompanied the accelerated modernization of a backward agrarian economy—a combination with which the rest of Western Europe was familiar from its own past. But the exit from Communism had no precedent. The much-anticipated passage from capitalism to socialism had been theorized ad nauseam in academies, universities and coffee bars from Belgrade to Berkeley; but no-one had thought to offer a blueprint for the transition from socialism to capitalism.
Next: Ian Buruma – Inventing Japan: 1853–1964
Previous: Eric Tyson and Ray Brown – Home Buying for Dummies