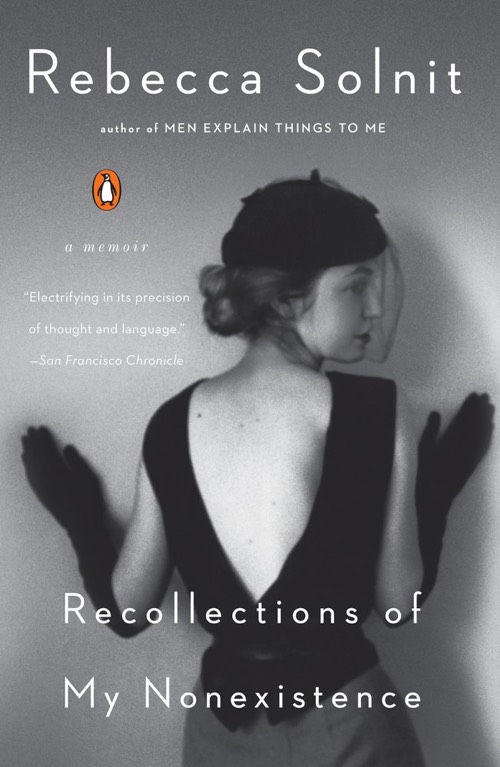 Recollections of My Nonexistence

No one was offering the help of recognizing what I was experiencing, or agreeing that I had the right to be safe and free. It was a kind of collective gaslighting. To live in a war that no one around me would acknowledge as a war—I am tempted to say that it made me crazy, but women are so often accused of being crazy, as a way of undermining their capacity to bear witness and the reality of what they testify to. Besides, in these cases, crazy is often a euphemism for unbearable suffering. So it didn't make me crazy; it made me unbearably anxious, preoccupied, indignant, and exhausted. I was faced with either surrendering my freedom in advance or risking losing it in the worst ways imaginable. One thing that makes people crazy is being told that the experiences they have did not actually happen, that the circumstances that hem them in are imaginary, that the problems are all in their head, and that if they are distressed it is a sign of their failure, when success would be to shut up or to cease to know what they know.p. 53
Most of what I owned was older than me, and I relished that; every object was an anchor to the past.p. 34
I knew what was lost. And the weight of it crushed me then, in those years when I was starting out, when I was trying to make a life, have a voice, find a place in the world. I did all those things, but I joked later that not getting raped was the most avid hobby of my youth. It took considerable vigilance and wariness and constantly prompted changed routes through cities, suburbs, wild places, through social groups, conversations, and relationships. You can drip one drop of blood into a glass of clear water and it will still appear to be clear water, or two drops or six, but at some point it will not be clear, not be water. How much of this enters your consciousness before your consciousness is changed? What does it do to all the women who have a drop or a teaspoon or a river of blood in their thoughts?pp. 65–66
Femininity at its most brutally conventional is a perpetual disappearing act, an erasure and a silencing to make more room for men, one in which your existence is considered an aggression and your nonexistence a form of gracious compliance.p. 85
When I wrote my book on walking almost twenty years later, I quoted Sylvia Plath, who declared when she was nineteen, “Being born a woman is my awful tragedy. Yes, my consuming desire to mingle with road crews, sailors and soldiers, barroom regulars—to be part of a scene, anonymous, listening, recording—all is spoiled by the fact that I am a girl, a female always in danger of assault and battery... I want to be able to sleep in an open field, to travel west, to walk freely at night.” Reading the passage long after I'd put it in the book, I wondered about who she might have been if she'd had the freedom of the city, as they used to call it, and of the hills, and of the night, of how her suicide in her kitchen at thirty must have been in part from the confinement of women in domestic spaces and definitions.p. 99
The neatness of the words unfurling in arcs and curves along hand-ruled pages suggested a kind of orderliness and propriety reaffirmed by the elaborate politeness in the salutations and the sign-offs in these letters about genocide. About how to push the Native people out of the way as whites flooded west and subjugate them and let their resources be pillaged, how to contain them and give them some handouts as their homelands were so degraded that food sources vanished. We would like the people involved in monstrosity to be recognizably monstrous, but many of them are diligent, unquestioning, obedient adherents to the norms of their time, trained in what to feel and think and notice and what not to. The men who wrote these reports seemed like earnest bureaucrats, sometimes sympathetic to the plight of the people they were helping to exterminate, always convinced of their own decency. It is the innocence that constitutes the crime.p. 199
Disagreement often prompts clarification, at least in my case, and it can be useful even when its intention is adversarial. Half my muses have been haters.p. 211
Next: Michael Broder – The Panic-Free Pregnancy: An Ob-GYN Separates Fact from Fiction on Food, Exercise, Travel, Pets, Coffee, and Other Concerns You Have While You Are Expecting
Previous: Robert Jordan – The Dragon Reborn