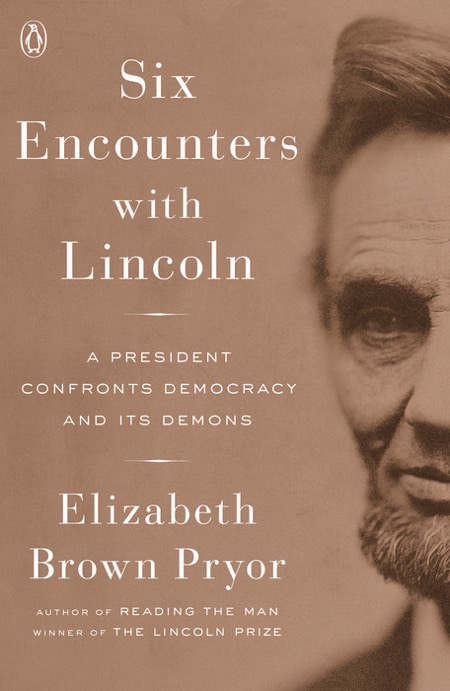 Six Encounters with Lincoln: A President Confronts Democracy and its Demons

Interestingly, these encounters also give us a sense of the difficulty Lincoln sometimes had in communicating. The eloquence of his formal writing and his delightful, whimsical humor have, to some degree, obscured the inelegance of his everyday interactions. He disliked spontaneous discussion with people who might misinterpret him. He seemed to be most comfortable when he could project his thoughts through parables or from a written script.
Learning on the job is always laudable and might have been fine if the times had been less perilous. It would have been acceptable in a Martin Van Buren or William Henry Harrison presidency and perhaps that is what Lincoln envisioned—a job of patronage, posturing, and party politics. But with a close reading of the political trends of the time, it simply looks like he was expedient, finding the most popular path and following it. This does not make him a moral compass for the nation, especially at a time of war when the consequences were greater and every stumbling step could and did lead to a corpse. In war, the price for “growing” was death.
Another moment of indelicacy was recorded at the War Department, where one night the President sat reading a stack of telegrams. When he came to the bottom of the pile he announced: “Well, I guess I have got down to the raisins.” Puzzled, the telegraph operators asked what he meant. He explained that a little girl he knew, having eaten too large a share of treats filled with raisins, became violently sick. After “an exhausting siege of throwing up, she gave an exclamation of satisfaction that the end of her trouble was near, for she had ‘got down to the raisins.’”
He paid little attention to his dress and this only increased the opportunities to scoff. Lincoln routinely greeted guests of all rank in scruffy carpet slippers and rumpled suits. One soldier who met the commander in chief thought his clothing was the dirtiest he had ever seen. Another visitor compared him to a shabby undertaker, and when Nathaniel Hawthorne came to call, he was startled to encounter the nation’s highest official in “a rusty black frock-coat and pantaloons, unbrushed, and worn so faithfully that the suit had adapted itself to the curves and angularities of his figure, and had grown to be an outer skin of the man.”
Lincoln was greatly distressed, for example, by a cartoon Harper’s Weekly ran after the Union debacle of December 1862, which showed “Columbia” asking the President, “Where are my 15,000 Sons—murdered at Fredericksburg?” and Lincoln replying, “This reminds me of a little joke—”
It is easy to conclude that the sixteenth president erred on the side of repression, overreacting in situations that were never really threatening, and failing to set a uniform standard for dealing with opposition. If, as he conceded, he had not the right to constrain the public, he had nonetheless taken the liberty to do it. The constitutional questions particularly stand out because of the contrast between Lincoln’s lofty rhetoric about cherished freedoms, and the rough way he allowed those freedoms to be handled. This must have bothered Lincoln as well, for he mused “whether any government, not too strong for the liberties of its people, can be strong enough to maintain its own existence, in great emergencies.”
Lincoln’s mailbag was filled with complaints about the agents appointed by his government, a record of such incessant chicanery it could be taken for slapstick, if the consequences had not been so terrible. Some Indian superintendents literally begged to be sent representatives with “clean hands and pure hearts,” but most agents continued to be appointed because of political connections or personal favoritism. Old friends from the Black Hawk War, unemployed cronies from New Salem, the Illinois town where Lincoln had lived in his twenties, and the President’s personal doctor all made the grade, though he drew the line at commissioning his nearly illiterate stepbrother. From Oregon, New Mexico, Colorado, and Utah came stories of agents paying annuities in worthless scrip, abusing Native women, or working Native Americans as slaves. Both contemporary observers and careful scholars have concluded that corruption and politicization of the Indian system reached its zenith during Lincoln’s presidency. The result, complained frontier folk, was that hostilities had actually escalated, making their life “intolerable” under his administration. One missionary calculated that tribal antipathy to whites increased tenfold in the 1860s. It was, wrote another, “a blunder and a crime.”
For her part, Elizabeth Cady Stanton saw Lincoln as “a dead weight on the people . . . at the very moment they needed a pillar of light to go before them in the wilderness.” She and Anthony also protested the administration’s “tendency to despotic rule,” through the curtailment of civil liberties. Stanton’s views were not changed by a conversation with the President in May 1864, during which he largely ignored her while telling stories to her husband.
From the point of view of Southern interests, sectionalists arguably jumped the gun in assessing Lincoln. Had they stuck by the Union, instead of seceding, the uneasy coalition probably would have tottered on for a good while, probably to their advantage, for Lincoln, in 1860, was wedded only to the containment of slavery, not its abolition.
Next: Michael Chabon – A Model World and Other Stories
Previous: Katsuhiro Otomo – Akira, Vol. 1