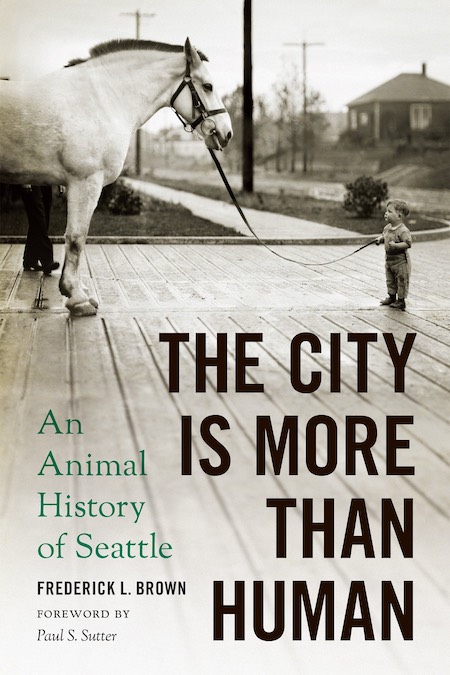 The City is More than Human: An Animal History of Seattle

Newspaper publisher Charles Prosch wrote that Puget Sound in the early days of white settlement was “a paradise for lazy people who were content to live like Indians.” How exactly the town’s elites distinguished the ambitious from the lazy is not entirely clear. But they relied in part on the distinction between U.S.-born settlers (“Bostons”) and HBC managers and workers (“King George men”)—the former almost exclusively whites, the latter including whites with Indian wives, Indians, Hawaiians, and people of mixed race. Some argued that association with Native people and the native environment posed a threat to whiteness. [Catherine] Blaine referred in her letters to “those filthy, vile men who cohabit with the diseased squaws.”
Increasingly, city dwellers defined themselves by what they consumed rather than what they produced at home, as the growing importance of expansive green lawns showed. Milk bottles presented a viable alternative to cows, while cows themselves evoked the country. For these reasons, cows were banned from roaming city streets by city ordinance in 1907 and from middle-class backyards through restrictive covenants in the 1920s. An important step in creating the new city was removing cows.
By 1900, legal restrictions and development had removed cows from many urban backyards. Cows were more common in outlying areas, personal property rolls reveal, but were hardly absent from dense neighborhoods close to downtown (see map 5). About 26 percent of families in the northeastern neighborhoods of Green Lake, Brooklyn (now the University District), Ross (now northern Queen Anne), Fremont, and Latona owned cows in 1900. About 16 percent of families in the northwestern suburb of Ballard owned cows, while less than 3 percent of families in the older neighborhoods near downtown did (see table 2.1).
Like manure, horse carcasses were foul, unsightly, and a potential source of disease, yet also valuable. And like manure, they were not so valuable that they were quickly and efficiently recycled into glue, fertilizer, and hides. In 1889, Seattle sank its dead horses in Elliott Bay rather than rendering them into other products. When the workers did not prepare the carcasses properly by cutting them open, they sometimes floated back to shore.
Horses’ personalities were part of the legal system. As one judge ruled in 1898: “Streets must be so constructed that the ordinary horse, with the ordinary disposition, allowing for the ordinary incidents of caprice or fright, can be driven with reasonable safety on them.” In creating the public space of streets, the city government had to take into account things that could frighten horses. The tendency of horses to run away required cities to put guardrails on bridges, to arrange construction so horses had adequate sight lines. The city’s first horse-drawn streetcar went down Second Avenue rather than risk frightening the concentrated horse traffic on First Avenue.
Seattle’s new neighborhoods were developed on explicitly racist lines, with restrictive covenants excluding races other than “Caucasian.” The national code of ethics of Realtors called for them to enforce segregation, creating whites-only neighborhoods. As reiterated in the Seattle Realtor, in a 1926 article titled “Ethics of the Profession,” a Realtor was “forbidden to introduce into any neighborhood a character of occupancy or of property, the members of any race or nationality, or any individuals whose presence will be detrimental to the neighborhood and to its property values.” White real-estate developers added a class-based set of exclusions to these racist covenants by also outlawing livestock in these neighborhoods and, therefore, whites who might own them as an economic strategy or simply as a preference. These legal instruments expressed and reinforced a vision of white middle-class respectability defined by racial exclusion and by the absence of livestock and the absence of pets. ... [Chickens] that white newcomers had celebrated seventy years earlier as markers of their success in implanting a European lifestyle on Puget Sound now became a symbol of backwardness. Throughout the city, real-estate developers placed racial restrictions and class-based animal restrictions side by side in restrictive covenants.
The city euthanized 16,831 cats and dogs in 1975, most of them perfectly healthy and well-behaved. In 2005, it euthanized 1,366 cats and dogs, all of them deemed too sick or poorly behaved to be adoptable. By some measures, there is even a shortage of well-behaved dogs in Seattle. Rescue groups regularly transport dogs from portions of the country where fewer dogs are spayed and neutered (the southern states, eastern Washington) to regions with highly effective spay/neuter programs (the Northeast, and Puget Sound in particular).
Next: David Sedaris – Barrel Fever: Stories and Essays
Previous: Ted Chiang – Exhalation