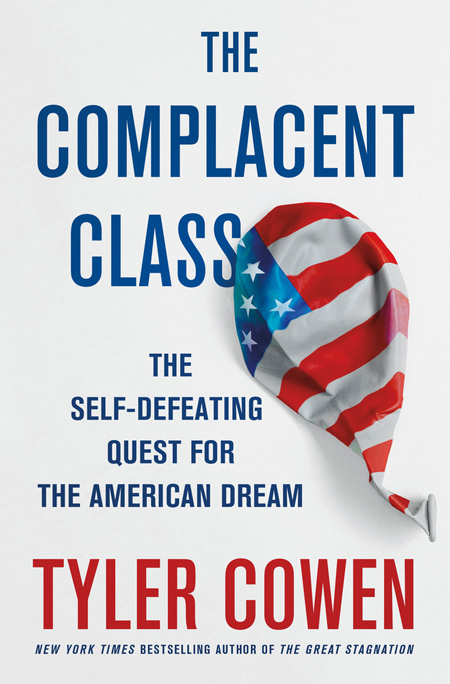 The Complacent Class: The Self-Defeating Quest for the American Dream

These days Americans are less likely to switch jobs, less likely to move around the country, and, on a given day, less likely to go outside the house at all. For instance, the interstate migration rate has fallen 51 percent below its 1948 to 1971 average and has been falling steadily since the mid-1980s. There has been a decline in the number of start-ups, as a percentage of business activity, since the 1990s.
Whether or not it is politically correct to admit it, I believe a lot of men have tendencies toward the brutish, but in today’s America, those tendencies are suppressed. Again, this is largely a positive development, but still we need to face up to the fact that many people don’t like it when the world becomes nicer. They do less well with nice. And eventually they will respond by behaving badly, whether it is at a Donald Trump rally or through internet harassment.
Notably, the list of the ten most segregated American cities, by income and education, includes four metropolitan areas in Texas. Since there has been a significant net movement of population into Texas, many Americans are opting for this segregation as part of their future, whether they know it or not. In many locales, the segregation model is passing a kind of market test as measured by the flow of Americans from one set of places to another. It might be more encouraging if the more-segregated areas were being rejected, but population flows show that is not the general trend.
... segregation becomes worse in some ways, eventually it is accepted as the “new normal,” to borrow a phrase from macroeconomics. And as many people see that many other people don’t seem to mind this arrangement, they stop thinking of it as especially objectionable, and it begins to feel almost natural. In the longer run, that can make the tendencies for segregation stronger yet. And besides, there usually isn’t a simple, up-front remedy to set everything right, as the underlying problems are quite deep and structural, rooted in some fairly fundamental features of America itself.
Companies, of course, can always find ways to use people who don’t fit their ideal. If need be, the company can still buy things or services from those or comparable workers, but outsourced at a great distance and kept away from the prevailing corporate culture at home in the firm. Outsourcing is not just about the potential for lower wages, it’s about not wanting to disturb a very tidy, neat, and somewhat conformist culture of highly cooperative and intelligent … nonconformists.
The relaxation of dress codes in many companies and social settings is one striking way how today’s America generates a mix of extreme tolerance, relative immobility, and extreme segregation—or shall I call it matching?—according to talents and skills. The less strict the dress code, in fact the harder it is to look good and to fit in, and that disadvantages those who are not from well-educated and successful backgrounds. Fashion is but one example of how the American wealthy have been redefining social status through a practice known as countersignaling. Countersignaling is when you go out of your way to show you don’t need to go out of your way. The boss doesn’t have to wear a tie or even dress up. If he did, that would suggest he had something to prove, which would be a negative rather than a positive impression. The next step is that the vice presidents also don’t have to dress up, and soon enough most of the company doesn’t have to dress up.
Americans at the top have become the experts in countersignaling, because they don’t feel they have to impress anyone. Everything is now casual, because the new aristocracy of talent enforces all the conformity that is needed.
The reality is that we understand the causes of crime fairly poorly, and the reasons we give for expecting crime rates to continue to fall are far from decisively correct. Let’s not be totally shocked if the next set of significant innovations among the American professions comes … in the profession of crime.
Next: Claudia Rankine – Citizen: An American Lyric
Previous: J.C. Hallman – Wm & H’ry: Literature, Love, and the Letters between William & Henry James