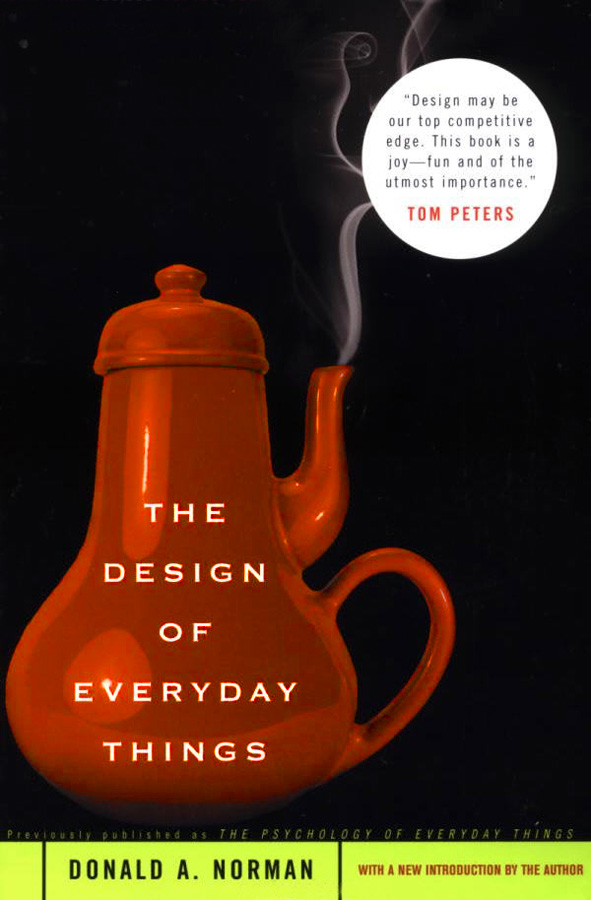 The Design of Everyday Things

When the typist went too quickly the typebars would collide, jamming the mechanism. The solution was to change the locations of the keys: letters such as i and e that were often typed in succession were placed on opposite sides of the machine so that their bars would not collide.
Each problem alone isn’t a big deal. But the total sum of all the trivial mal-design unnecessarily adds to the trauma of everyday life.
Even though each point may be simple, once you fall behind it is hard to catch up. The result: mathematics phobia. Not because the material is difficult, but because it is taught so that difficulty in one stage hinders further progress. The problem is that once failure starts, it soon generalizes by self-blame to all of mathematics.
If an error is possible, someone will make it. The designer must assume that all possible errors will occur and design so as to minimize the chance of the error in the first place, or its effects once it gets made.
When simple things need pictures, labels, or instructions, the design has failed.
Does the system provide actions that correspond to the intentions of the person? The difference between the intentions and the allowable actions is the Gulf of Execution.
You are playing a piece of music (without too much attention) and it is similar to another (which you know better); suddenly you are playing the more familiar piece. Or you go off to your bedroom to change your clothes for dinner and find yourself in bed. (This slip was first reported by William James in 1890.)
In the end, the qwerty keyboard was adopted throughout the world with but minor variations. We are committed to it, even though it was designed to satisfy constraints that no longer apply, was based on a style of typing no longer used, and is difficult to learn.
Even when designers become users, their deep understanding and close contact with the device they are designing means that they operate it almost entirely from knowledge in the head. The user, especially the first-time or infrequent user, must rely almost entirely on knowledge in the world. That is a big difference, fundamental to the design.
Labels are important and often necessary, but the appropriate use of natural mappings can minimize the need for them. Wherever labels seem necessary, consider another design.
Next: Anthony Hope – The Prisoner of Zenda
Previous: Josh Clark – Tapworthy: Designing Great iPhone Apps