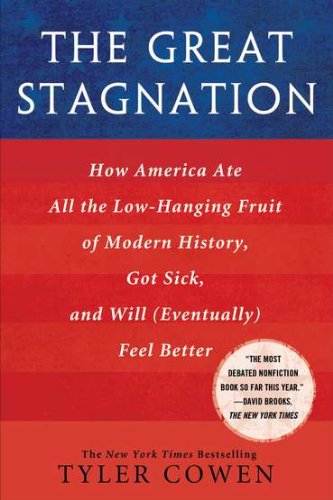 The Great Stagnation: How America Ate All The Low-Hanging Fruit of Modern History, Got Sick, and Will (Eventually) Feel Better

A brief, pretty simple, and convincing argument about why the U.S. economy is stagnant. Robert Reich and other liberal writers point to income inequality and deregulation as the source of most of our economic problems, which I agree with, and Tyler Cowen says it’s because we have reached an innovation and job-growth plateau, and can’t assume that the standard of living will keep improving indefinitely. I agree with this too. Cowen keeps making disclaimers about the internet as the one sector of the economy that’s still growing, which is good news for people like me.

The American left has pointed out and indeed stressed measures of stagnant median income, but it usually blames politics, insufficient redistribution, or poor educational opportunities rather than considering the idea of a technological plateau. The American right is more likely to deny the relevance of the slow-growth numbers, but at this point, the combination of slow median income growth, rising income inequality, and a massive financial crisis—the latter accompanied by overoptimism about the financial future—is too strong and too persistent to treat as a mere artifact of statistical mismeasurement.
The rate of high school completion has been falling in this country. When you measure that rate carefully, it appears that the U.S. high school graduation rate peaked in the late 1960s at about 80 percent. The actual graduation rate today is much lower than the official 88 percent estimate, and there is no evidence of convergence of minority-majority graduation rates over the last thirty-five years, once you include incarcerated populations in the totals. Furthermore, about 20 percent of all new high school credentials each year come from passing equivalency tests. In the labor market, these individuals perform at the level of nongraduates rather than high school graduates. None of those facts strikes me as signs of a school system that is rising in overall productivity.
A fundamental way to put the point is this: A lot of our recent innovations are “private goods” rather than “public goods.” Contemporary innovation often takes the form of expanding positions of economic and political privilege, extracting resources from the government by lobbying, seeking the sometimes extreme protections of intellectual property laws, and producing goods that are exclusive or status related rather than universal, private rather than public; think twenty-five seasons of new, fall season Gucci handbags.   The dubious financial innovations connected to our recent financial crisis are another (perhaps less obvious) example of discoveries that benefit some individuals but are not public goods more generally. A lot of the gains from recent financial innovations are captured by a relatively small number of individuals. Top American earners are increasingly concentrated in the financial sector of the economy.
The “rise in income inequality” and the “slowdown in ideas production” are two ways of describing the same phenomenon, namely that current innovation is more geared to private goods than to public goods.
Next: Ron Galloway and Allyssa Rich – Rethinking Powerpoint: Designing & Delivering Presentations that Engage the Mind
Previous: Matt Linderman and Jason Fried – Defensive Design for the Web