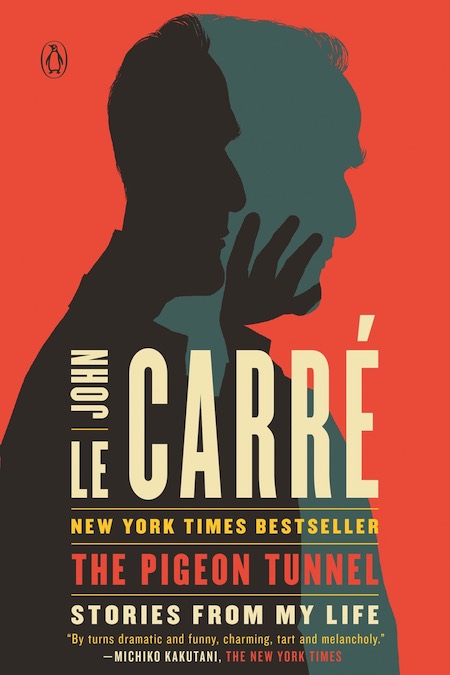 The Pigeon Tunnel: Stories from My Life

These are true stories told from memory – to which you are entitled to ask, what is truth, and what is memory to a creative writer in what we may delicately call the evening of his life?
Spying did not introduce me to secrecy. Evasion and deception were the necessary weapons of my childhood. In adolescence we are all spies of a sort, but I was a veteran. When the secret world came to claim me, it felt like a coming home.
[Rupert] Murdoch is bang on time. He is smaller than I remember him, but more pugnacious, and has acquired that hasty waddle and little buck of the pelvis with which great men of affairs advance on one another, hand outstretched, for the cameras. The slant of the head in relation to the body is more pronounced than I remember, and when he wrinkles up his eyes to give me his sunny smile, I have the odd feeling he’s taking aim at me.
I remember little of being very young. I remember the dissembling as we grew up, and the need to cobble together an identity for myself, and how in order to do this I filched from the manners and lifestyle of my peers and betters, even to the extent of pretending I had a settled home life with real parents and ponies. Listening to myself today, watching myself when I have to, I can still detect traces of the lost originals, chief among them obviously my father. All this no doubt made me an ideal recruit to the secret flag. But nothing lasted: not the Eton schoolmaster, not the MI5 man, not the MI6 man. Only the writer in me stuck the course. If I look over my life from here, I see it as a succession of engagements and escapes, and I thank goodness that the writing kept me relatively straight and largely sane. My father’s refusal to accept the simplest truth about himself set me on a path of enquiry from which I never returned. In the absence of a mother or sisters I learned women late, if ever, and we all paid a price for that.
Though my mother’s first name was Olive, my father called her Wiggly, rain or shine. Later, when technically I grew up, I too gave women silly nicknames in order to make them less formidable.
Next: William McRaven – Sea Stories: My Life in Special Operations
Previous: Sarah Bakewell – At the Existentialist Café: Freedom, Being, and Apricot Cocktails