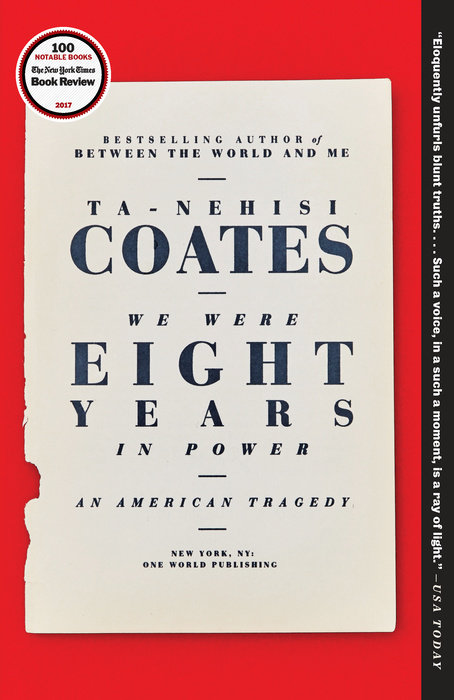 We Were Eight Years in Power: An American Tragedy

It is not so much that I logically reasoned out that Obama’s election would author a post-racist age. But it now seemed possible that white supremacy, the scourge of American history, might well be banished in my lifetime. In those days I imagined racism as a tumor that could be isolated and removed from the body of America, not as a pervasive system both native and essential to that body.
[Michelle Obama's] day was almost finished, and she was tired. I was the last in a battery of interviews. Still, she smiled, shook my hand, and said, reaching for a vase of plastic flowers, “We got these for you. What, you don’t believe we bought these for you?” I laughed, sat down, and asked her about her childhood.
The implications of the true story are existential and corrosive to our larger national myth. To understand that the most costly war in this country’s history was launched in direct opposition to everything the country claims to be, to understand that this war was the product of centuries of enslavement, which is to see an even longer, more total war, is to alter the accepted conception of America as a beacon of freedom. How does one face this truth or forge a national identity out of it?
But immersed in the reading and my electric seminar, it became clear to me that the common theory of providential progress, of the inevitable reconciliation between the sin of slavery and the democratic ideal, was myth. Marking the moment of awakening is like marking the moment one fell in love. If forced I would say I took my tumble with the dark vision of historian Edmund Morgan’s American Slavery, American Freedom.
At the war’s start, Senator James Chesnut Jr. of South Carolina, believing that casualties would be minimal, claimed he would drink all the blood shed in the coming disturbance. Five years later, 750,000 Americans were dead.
For African Americans, war commenced not in 1861, but in 1661, when the Virginia Colony began passing America’s first black codes, the charter documents of a slave society that rendered blacks a permanent servile class and whites a mass aristocracy. They were also a declaration of war.
There was always a sense that African American journalists should avoid being tagged as “black” lest they be “boxed in” and unable to pursue more “universal” topics such as the economy and global policy. But the more I wrote, the more I saw I wasn’t boxed in as much as those who dismissed my chosen beat were boxed out. The notion that writing about race, which is to say, the force of white supremacy, is marginal and provincial is itself parcel to white supremacy, premised on the notion that the foundational crimes of this country are mostly irrelevant to its existence.
Now we have half-stepped away from our long centuries of despoilment, promising, “Never again.” But still we are haunted. It is as though we have run up a credit card bill and, having pledged to charge no more, remain befuddled that the balance does not disappear. The effects of that balance, interest accruing daily, are all around us.
To ignore the fact that one of the oldest republics in the world was erected on a foundation of white supremacy, to pretend that the problems of a dual society are the same as the problems of unregulated capitalism, is to cover the sin of national plunder with the sin of national lying. The lie ignores the fact that reducing American poverty and ending white supremacy are not the same.
“I appear before you this evening as a thief and a robber,” Frederick Douglass told his audiences. “I stole this head, these limbs, this body from my master, and ran off with them.”
No one—not our fathers, not our police, and not our gods—is coming to save us. The worst really is possible. My aim is to never be caught, as the rappers say, acting like it can’t happen. And my ambition is to write both in defiance of tragedy and in blindness of its possibility, to keep screaming into the waves—just as my ancestors did.
Next: Arlie Russell Hochschild – The Managed Heart: Commercialization of Human Feeling
Previous: Nicole Fenton & Kate Kiefer Lee – Nicely Said: Writing for the Web with Style and Purpose