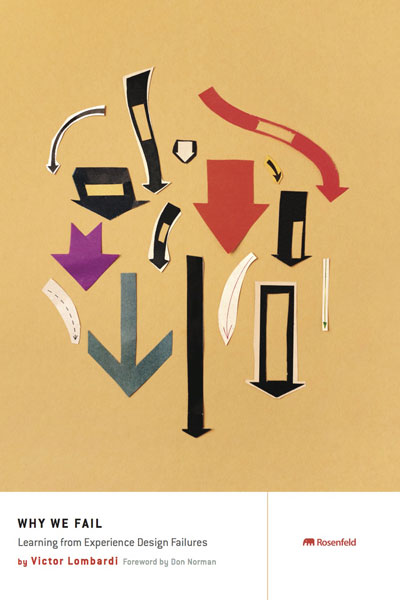 Why We Fail: Learning from Experience Design Failures

A series of case studies about technology products that failed in the marketplace immediately (like the Zune) or gradually (Classmates.com) due to holistic experience problems. After the case studies Lombardi delivers some valuable lessons: usability is not enough to guarantee a product’s experiential quality, for example. Every corporate failure is, in truth, a boring pile of internal political and technical minutia, and Lombardi is honest about the task of a historian in talking about these projects: to make a simplified but useful narrative out of as much primary evidence as can be found. One of the better aspects of this book is that, when possible, Lombardi talked to the people responsible for these failures and incorporated their side of the story.

The seminal work on experience as an economic force is The Experience Economy by Joseph Pine II and James H. Gilmore, first published in 1999. They observed that “companies stage an experience whenever they engage customers, connecting with them in a personal, memorable way.” They argue that experiences are an economic force just like commodities, goods, and services, which can be intentionally produced, consumed, and measured.

Dashboards in cars were a design feature borrowed from horse and buggies, where they kept the dirt kicked up by the horse from hitting passengers and their clothing. The fundamental purpose of the first dashboards was to protect the driver.

As cars became more sophisticated with devices like ignition switches and gauges to measure electrical current and speed, the logical location for these devices was bolted to the dashboard where the driver could easily see and reach them.

How can Germans drive this fast without catastrophic accidents occurring every day? To earn a driver’s license in Germany requires taking 14 theory classes and 12 driving lessons at a driving school over the course of three months at a cost of more than 1,000 euros. German drivers are better trained than American drivers, and they take driving more seriously.
OpenID was harmful to the general public on the Internet. There is no reason that tests like the ones Yahoo! conducted could not have been performed by the OpenID Foundation years earlier. Testing with a small number of people early on is less damaging than experimenting on millions of people with an untried product.
The subscription fee is charged month after month, and inevitably some of these customers will become “sleepers” who stop using the service but forget to cancel their subscriptions. Businesses that are less ethical will (oops) forget to wake them up. And so it shouldn’t be surprising that this business model tempts businesses down a slippery slope of unethical behavior. I know some companies dance on the line between ethical and unethical marketing and billing practices because I’ve been there and I’ve seen it.
Conversely, if you don’t face a shift to a new enabling technology, drastic redesign may not be justified. Amazon is a good example of this: for more than 10 years Amazon has gradually updated its website design as the business evolved, always avoiding big redesigns. Simultaneously, the company has embraced new technologies by releasing new, device-appropriate designs for mobile phones, tablets, and the Kindle e-reader.
Late in 2010 a technologist who worked at Symbian for several years published his explanation for why Symbian failed. Upon reading it, science fiction author and futurist Bruce Sterling had this to say:

Sometimes I think that EVERY dead medium dies like this—for reasons that may seem easy for pundits to explain in retrospect—“the iPhone appeared”—but are, in reality, incredibly complicated, satanically detailed and paralyzingly boring to all outsiders.

When we do see a problem, even a bad one, we’re less likely to do something to fix it if other people also see the problem. This is called the bystander effect. Sometimes this happens because we assume someone else will fix it. Sometimes it is due to pluralistic ignorance, which is when we assume nothing is wrong because nobody else seems concerned. I have to wonder if the early OpenID Foundation directors had concerns about usability but didn’t voice them strongly enough because other directors didn’t.
Final Cut Pro X, the Zune, and Pownce needed more than an assessment of usability. Final Cut changed both its feature set and its interface, so Apple could have benefited from understanding which features were vital but also how customers perceived the learning curve. Pownce needed to know if groups of people would use the service on an ongoing basis instead of, or in addition to, other social media services. Microsoft needed to know if the Zune was more attractive than the iPod to some segment of the market based on their points of differentiation.
Team members usually have ideas about what may go wrong, but are sometimes hesitant to share them. A pre-mortem is one way to elicit these ideas. A pre-mortem is the opposite of a post-mortem: at the beginning of a project, I pose the hypothetical that the project has failed. I then ask the team why they think it failed, and what changes would have helped avoid the failure. We can then turn those hypothetical solutions into testable hypotheses and test them.
Next: Paul Allen – Idea Man: A Memoir by the Cofounder of Microsoft
Previous: Andy Weir – The Martian