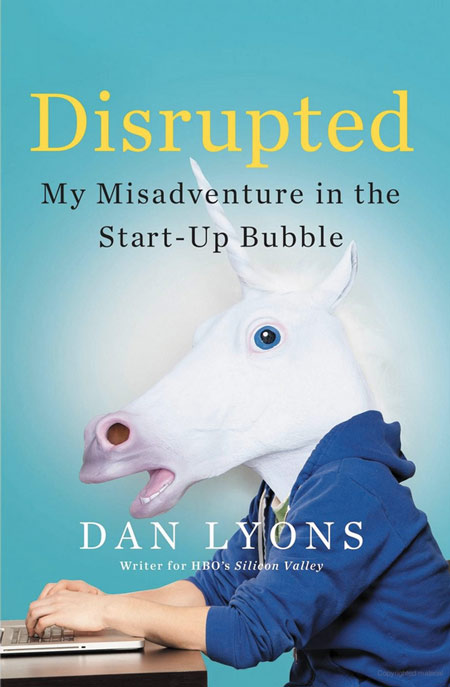 Disrupted: My Misadventure in the Start-Up Bubble

The offices bear a striking resemblance to the Montessori preschool that my kids attended: lots of bright basic colors, plenty of toys, and a nap room with a hammock and soothing palm tree murals on the wall.
I’m working for the people who fill your email inbox with junk mail, the online equivalent of those pesky telemarketers who call you at dinnertime to sell you new windows or a set of solar panels for your roof. I rationalize this by telling myself that while the work might be ignoble, it’s not necessarily evil. We’re not Hitler. We’re just annoying people. Sure, arguably we are making the world a little bit worse—but only a little bit. That’s what I tell myself.
Online marketers have invented euphemisms to make the work they do sound less awful. For example, we’re told that our email campaigns do not involve badgering people, or pestering them—rather, we’re “nurturing” them. “Lead nurturing” is a big thing in the world of online marketing. If someone doesn’t open our first email, we’ll nurture them again, and we’ll keep on nurturing them until they finally cave in and buy something.
HubSpot seems to recruit a certain kind of person: young and easily influenced, kids who belonged to sororities and fraternities or played sports in college. Many are working in their first jobs. As far as I can tell there are no black people, not just among my recruiting class, but across the entire company. The HubSpotters are not just white but a certain kind of white: middle-class, suburban, mostly from the Boston area. They look the same, dress the same. The uniformity is amazing.
Managers, people like Zack, get the same training that I’m getting, but then they go to an extra class where they learn how to use DISC when they are managing people. Try to imagine the calamity of that: Zack, age twenty-eight, with no management experience, gets training from Dave, a weekend rock guitarist, on how to apply a set of fundamentally unsound psychological principles as a way to manipulate the people who report to him.
I try to distance myself from the abuse. I pretend I’m an anthropologist. How does the tribe behave when the chief has decided that one of the members must be driven off? I imagine that I’m a research psychologist and that the HubSpot marketing department is a laboratory exercise, a corporate version of the Stanford prison experiment or the Milgram experiment at Yale. I imagine that I am studying the way a corporate department goes about getting rid of an unwanted employee, using myself as the subject of the experiment.
So we figure we’re safe. We figure we can trust the people who run online services not to snoop on us. I used to believe that. I don’t anymore. Halligan, Volpe, and Chernov were not random nerds going rogue in some data center. They were top executives of a publicly traded company. They’re the ones who were supposed to be keeping an eye on the others. During my time at HubSpot, I was shocked to see how badly managed the company was and how packs of inexperienced twenty-something employees were being turned loose and given huge responsibility with little or no oversight. In the world of start-ups that is now the norm, not the exception.
Next: David Foster Wallace – Oblivion: Stories
Previous: Nick Srnicek & Alex Williams – Inventing the Future: Postcapitalism and a World Without Work