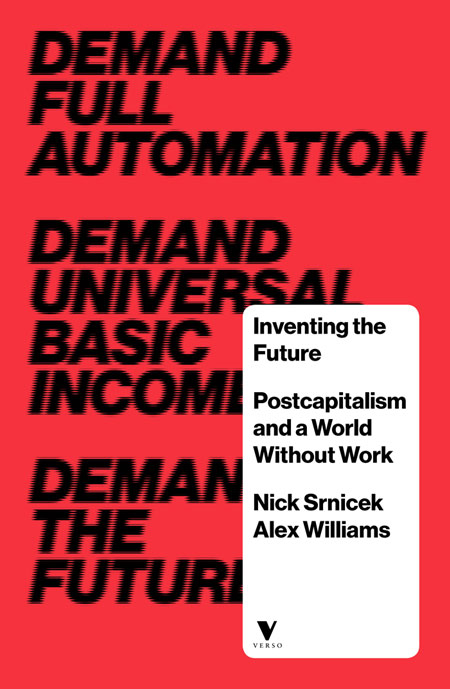 Inventing the Future: Postcapitalism and a World Without Work

For any movement that struggles to escape neoliberalism and build something better, these folk-political approaches are insufficient. In their place, this book sets out an alternative politics – one that seeks to take back control over our future and to foster the ambition for a world more modern than capitalism will allow.
From the alter-globalisation struggles of the late 1990s, through the antiwar and ecological coalitions of the early 2000s, and into the new student uprisings and Occupy movements since 2008, a common pattern emerges: resistance struggles rise rapidly, mobilise increasingly large numbers of people, and yet fade away only to be replaced by a renewed sense of apathy, melancholy and defeat. Despite the desires of millions for a better world, the effects of these movements prove minimal.
To outside observers, it is often not even clear what the movements want, beyond expressing a generalised discontent with the world. The contemporary protest has become a melange of wild and varied demands.
It is worth recalling that today’s familiar forms of organisation and tactics, far from being natural or pre-given, have instead been developed over time in response to specific political problems. Petitions, occupations, strikes, vanguard parties, affinity groups, trade unions: all arose out of particular historical conditions.12 Yet the fact that certain ways of organising and acting were once useful does not guarantee their continued relevance.
As a first approximation, we can therefore define folk politics as a collective and historically constructed political common sense that has become out of joint with the actual mechanisms of power. As our political, economic, social and technological world changes, tactics and strategies which were previously capable of transforming collective power into emancipatory gains have now become drained of their effectiveness.
Political movements based around keeping a hospital open or preventing evictions are all admirable, but they are importantly different from movements trying to challenge neoliberal capitalism. The idea that one organisation, tactic or strategy applies equally well to any sort of struggle is one of the most pervasive and damaging beliefs among today’s left.
Folk politics presents itself as another possible response to the problems of overwhelming complexity. If we do not understand how the world operates, the folk-political injunction is to reduce complexity down to a human scale. Indeed, folk-political writing is saturated with calls for a return to authenticity, to immediacy, to a world that is ‘transparent’, ‘human-scaled’, ‘tangible’, ‘slow’, ‘harmonious’, ‘simple’, and ‘everyday’. Such thinking rejects the complexity of the contemporary world, and thereby rejects the possibility of a truly postcapitalist world. It attempts to give a human face to power; whereas what is truly terrifying is the generally asubjective nature of the system.
As Milton Friedman famously put it, ‘Only a crisis – actual or perceived – produces real change. When that crisis occurs, the actions that are taken depend on the ideas that are lying around. That, I believe, is our basic function: to develop alternatives to existing policies, to keep them alive and available until the politically impossible becomes the politically inevitable.’
Whereas negative freedom is concerned with assuring the formal right to avoid interference, ‘synthetic freedom’ recognises that a formal right without a material capacity is worthless. Under a democracy, for example, we are all formally free to run for political leadership. But without the financial and social resources to run a campaign, this is a meaningless freedom. Equally, we are all formally free to not take a job, but most of us are nevertheless practically forced into accepting whatever is on offer. In either case, various options may be theoretically available, but for all practical purposes are off the table.
The slow growth of wages leads precarity to also be expressed in the anxiety over high levels of consumer debt and low levels of personal savings. In the United States, for example, a full 34 per cent of fulltime workers live paycheque-to-paycheque, while in the UK, 35 per cent of people could not live off their savings for more than a month. And at its most vicious, precarity is indicated by a rise in depression, anxiety and suicides – an ‘excess’ that goes uncounted in traditional economic measures. Indeed, unemployment is associated with a fifth of all global suicides, and this has only worsened in the wake of the financial crisis.
Work must be refused and reduced, building our synthetic freedom in the process. As we have set out in this chapter, achieving this will require the realisation of four minimal demands:
Our first demand is for a fully automated economy. Using the latest technological developments, such an economy would aim to liberate humanity from the drudgery of work while simultaneously producing increasing amounts of wealth.
The widespread demand that others adopt the work ethic is matched only by the disdain we feel for our own jobs. Today, across the world, only 13 per cent of people say they find their jobs engaging. Physically degraded, mentally drained and socially exhausted, most workers find themselves under immense amounts of stress in their jobs. For the vast majority of people, work offers no meaning, fulfilment or redemption – it is simply something to pay the bills. Those already excluded from jobs should not be fighting for inclusion in a society of work and labour, but rather be building the conditions to reproduce their lives outside of work.
Under normal democratic circumstances, demands are dealt with separately and within existing institutions – for instance, minimum wage increases, unemployment benefits and healthcare provision. Small changes are granted, but institutional arrangements, including society as a whole, are never questioned. In this fashion, existing hegemonies can be reinforced and threats generally modulated effectively. By contrast, a populist movement begins to emerge when these demands – for fair pay, social housing, childcare, and so on – are increasingly blocked.
Next: Dan Lyons – Disrupted: My Misadventure in the Start-Up Bubble
Previous: Paul Stob – William James and the Art of Popular Statement