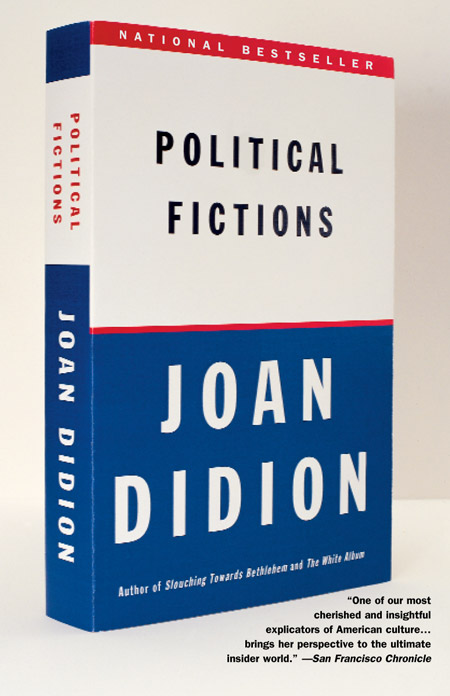 “Florida,” in this light, could be seen as a perfectly legible ideogram of the process itself, and of where that process had taken us: the reduction of a national presidential election to a few hundred voters over which both parties could fight for thirty-six days was the logical imaginative representation of a process that had relentlessly worked, to the end of eliminating known risk factors, to restrict the contest to the smallest possible electorate.
Among those who traveled regularly with the campaigns, in other words, it was taken for granted that these “events” they were covering, and on which they were in fact filing, were not merely meaningless but deliberately so: occasions in which film could be shot and no mistakes made (“They hope he won’t make any mistakes,” the NBC correspondent covering George Bush kept saying the evening of the September 25, 1988, debate at Wake Forest College, and, an hour and a half later, “He didn’t make any big mistakes”), events designed only to provide settings for those unpaid television spots which in this case were appearing, even as we spoke, on the local news in California’s three major media markets. “On the fishing trip, there was no way for the television crews to get videotapes out,” The Los Angeles Times noted a few weeks later in a piece about how “poorly designed and executed events” had interfered with coverage of a Bush campaign “environmental” swing through the Pacific Northwest. “At the lumber mill, Bush’s advance team arranged camera angles so poorly that in one setup only his legs could get on camera.” A Bush adviser had been quoted: “There is no reason for camera angles not being provided for. We’re going to sit down and talk about these things at length.” Any traveling campaign, then, was a set, moved at considerable expense from location to location.
It was Donald Regan, in his 1988 For the Record: From Wall Street to Washington, who told us how the schedule reminded the president when it was time to give a birthday present (“a funny hat or a tee shirt bearing a jocular message”) to one or another staff member. “These gifts were chosen by others, and sometimes Reagan barely knew the person to whom he was giving them, but his pleasure in these contacts was genuine.… On one occasion, when he was somehow given the wrong date for one man’s birthday and called to offer congratulations, nobody had the heart to tell him about the mistake.”
As President, Ronald Reagan acted on the work habits of a lifetime: he regarded his daily schedule as being something like a shooting script in which characters came and went, scenes were rehearsed and acted out, and the plot was advanced one day at a time, and not always in sequence. The Chief of Staff was a sort of producer, making certain that the star had what he needed to do his best; the staff was like the crew, invisible behind the lights, watching the performance their behind-the-scenes efforts had made possible.… Reagan’s performance was almost always flawless. If he was scheduled to receive a visitor at ten o’clock, he would finish whatever else he was doing at 9:58, clear off his desk, clear his mind of whatever had gone before, and prepare himself for the next scene.
New products have been for at least the past several decades exhaustively exposed to focus research. The use of such groups in marketing, however, has as its general intention the sampling of public opinion at large, the extrapolation of the opinion of the majority from the opinion of a few. What seemed novel about the use of focus groups in the 1992 campaign was the increasingly narrow part of the population to which either party was interested in listening, and the extent to which this extreme selectivity had transformed the governing of the country, for most of its citizens, into a series of signals meant for someone else.
What seems most remarkable in this Woodward book is exactly what seemed remarkable in the previous Woodward books, each of which was presented as the insiders’ inside story and each of which went on to become a number-one bestseller: these are books in which measurable cerebral activity is virtually absent.
Mr. Woodward dutifully tries, in the note that prefaces The Choice, to provide the “why” paragraph, the “billboard,” the sentence or sentences that explain to the reader why the book was written and what it is about. That these are questions with which he experiences considerable discomfort seems clear.
No one who ever passed through an American public high school could have watched William Jefferson Clinton running for office in 1992 and failed to recognize the familiar predatory sexuality of the provincial adolescent.
The cost of producing a television show on which Wolf Blitzer or John Gibson referees an argument between an unpaid “former federal prosecutor” and an unpaid “legal scholar” is significantly lower than that of producing conventional programming. This is, as they say, the “end of the day,” or the bottom-line fact. The explosion of “news comment” programming occasioned by this fact requires, if viewers are to be kept from tuning out, nonstop breaking stories on which the stakes can be raised hourly.
Next: Mat Marquis – JavaScript for Web Designers
Previous: Steven Johnson – How We Got to Now: Six Innovations that Made the Modern World