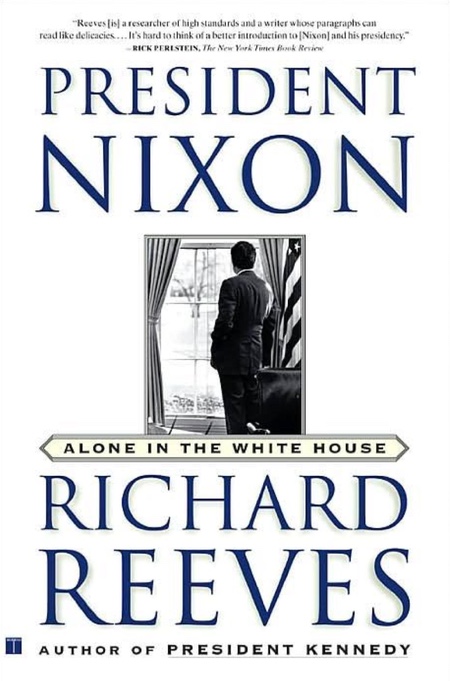 He had a tribal and genetic view of peoples everywhere. He gloried in cultural warfare, dividing the nation geographically, generationally, racially, religiously. He believed that was what all politicians did. His “silent majority,” a resentful populist center of working and middle-class Christians, loved him not for himself but for his enemies.
His men, particularly Haldeman—who had been with Nixon on and off for eight years, beginning as an advance man in his first campaign for the presidency—knew that fatigue was Nixon’s real enemy; he could not focus for more than three or four hours at a time. He took naps and came back to work for a couple of hours more. But the naps were a secret, usually marked “staff time” on his daily schedules. Part of Haldeman’s job, as he saw it, was to protect Nixon from himself. When the President got too tired, he could not sleep; he might take pills or a drink or two—he had trouble with liquor, sometimes slurring his words after only a single drink—and then be unable to concentrate the next day. But Nixon would never admit that, even to himself. He was a man of will, who sometimes persuaded himself that normal human limits were symbols of weakness. Sleep, and vacations, too, he considered a waste of time—or so he said. In fact, he needed EOB 175 for naps as well as brainwork.
Actually, he believed black people were genetically inferior to whites. Talking about welfare reform with Moynihan out of the room, Nixon told Haldeman and Ehrlichman: “You have to face the fact that the whole problem is really the blacks. The key is to devise a system that recognizes this while not appearing to….” In private he would assert that there had never in history been a successful or adequate black nation. “Africa is hopeless,” he told Ehrlichman. “The worst is Liberia, which we built….” But those were not views for public consumption.
At the end of those four hours, even the densest must have realized that the consultation was—in the word Haldeman favored—nothing more than “therapy.” They were getting time with the President, but he did not much care what they thought. In fact, he rather enjoyed the sensation of being a leader who could not be swayed by the arguments of his titled advisers.
Nixon took great pride in the fact that he wrote his own most important speeches—or edited speechwriters so much that their work became his—something fewer and fewer modern politicians did anymore. In fact, like his hero Woodrow Wilson, Nixon believed writing—clarifying and transferring ideas into enlightening and persuasive rhetoric—was the most important part of the presidency.
He stayed out of Washington for a day more, memorizing the speech. It was a matter of great pride to Nixon that he could do that—like Winston Churchill, like Charles de Gaulle. He enjoyed quoting from a conversation he had with Churchill’s son and biographer, Randolph Churchill, who said: “My father spends the best hours of his life writing out his extemporaneous speeches.”
It was also time to release information on the President’s annual physical examination and Nixon wanted to handle the programming of that himself, writing to Ron Ziegler: “Let Dr. Tkach give them the resuits…. He should then say that his major concern about the President’s health is that he does not get enough recreation, does not have the relaxations of others in the office. He does not play bridge, he has played golf only four times in the last year, he bowled five times….; He should say that the President’s daily work schedule is the most back-breaking that he has ever observed in a public figure. He should point out, nevertheless, that the President remains in excellent health due to very spartan habits…. I think Tkach could do it with complete credibility….”
To Nixon, calming the animals—to win time and options for secret maneuver—was central to leadership.
Nixon, as he had done on many other domestic bills, figured if you can’t beat it with a veto, then sign it and take the credit.
The President watched Patton twelve times, according to records in the White House Military Office, which provided projectionists to show films in the White House and at Camp David. He also arranged screenings for eleven Democratic senators, beginning with Senator Sam Ervin of North Carolina. China transcripts released on May 7, 2001, show that Chou En-lai brought up the film at least twice during their conversations when Nixon went to China in February 1972. Patton, however, was not the film Nixon viewed most often in the White House. He loved Around the World in 80 Days, according to Ehrlichman in Witness to Power, and knew the dialogue by heart. He would announce his favorite scenes, saying things like: “Watch, watch. Here comes the elephant!”
Next: Colm Tóibín – Homage to Barcelona
Previous: Sarah Bakewell – How to Live: Or a Life of Montaigne in One Question and Twenty Attempts at an Answer