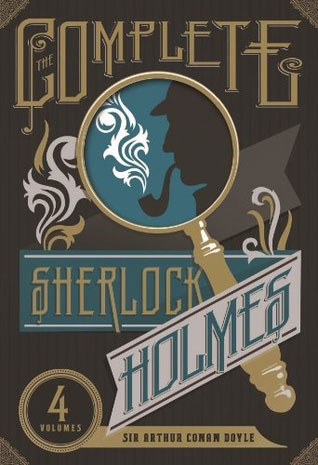 “They say that genius is an infinite capacity for taking pains,” he remarked with a smile.
“I would not tell them too much,” said Holmes. “Women are never to be entirely trusted—not the best of them.” I did not pause to argue over this atrocious sentiment. “I shall be back in an hour or two,” I remarked.
“Then I trust that you at least will honour me with your company,” said Sherlock Holmes. “It is always a joy to meet an American, Mr. Moulton, for I am one of those who believe that the folly of a monarch and the blundering of a minister in far-gone years will not prevent our children from being some day citizens of the same world-wide country under a flag which shall be a quartering of the Union Jack with the Stars and Stripes.”
And yet she had sonic secret sorrow, this woman.This has to be a typo, but would be a good band name.
I have always held, too, that pistol practice should be distinctly an open-air pastime; and when Holmes, in one of his queer humours, would sit in an armchair with his hair-trigger and a hundred Boxer cartridges and proceed to adorn the opposite wall with a patriotic V. R. done in bullet-pocks, I felt strongly that neither the atmosphere nor the appearance of our room was improved by it.
His eyes kindled and a slight flush sprang into his thin cheeks. For an instant the veil had lifted upon his keen, intense nature, but for an instant only. When I glanced again his face had resumed that red-Indian composure which had made so many regard him as a machine rather than a man.
During my long and intimate acquaintance with Mr. Sherlock Holmes I had never heard him refer to his relations, and hardly ever to his own early life. This reticence upon his part had increased the somewhat inhuman effect which he produced upon me, until sometimes I found myself regarding him as an isolated phenomenon, a brain without a heart, as deficient in human sympathy as he was preeminent in intelligence.
There are many men in London, you know, who, some from shyness, some from misanthropy, have no wish for the company of their fellows. Yet they are not averse to comfortable chairs and the latest periodicals. It is for the convenience of these that the Diogenes Club was started, and it now contains the most unsociable and unclubable men in town. No member is permitted to take the least notice of any other one. Save in the Stranger’s Room, no talking is, under any circumstances, allowed, and three offences, if brought to the notice of the committee, render the talker liable to expulsion.
“My dear Watson, Professor Moriarty is not a man who lets the grass grow under his feet.”
“Well, well,” said he, at last. “It is, of course, possible that a cunning man might change the tyres of his bicycle in order to leave unfamiliar tracks. A criminal who was capable of such a thought is a man whom I should be proud to do business with.”
Holmes had remarkable powers, carefully cultivated, of seeing in the dark.
So long as he was in actual professional practice the records of his successes were of some practical value to him, but since he has definitely retired from London and betaken himself to study and bee-farming on the Sussex Downs, notoriety has become hateful to him, and he has peremptorily requested that his wishes in this matter should be strictly observed.
His incredible untidiness, his addiction to music at strange hours, his occasional revolver practice within doors, his weird and often malodorous scientific experiments, and the atmosphere of violence and danger which hung around him made him the very worst tenant in London. On the other hand, his payments were princely. I have no doubt that the house might have been purchased at the price which Holmes paid for his rooms during the years that I was with him.
The landlady stood in the deepest awe of him and never dared to interfere with him, however outrageous his proceedings might seem. She was fond of him, too, for he had a remarkable gentleness and courtesy in his dealings with women. He disliked and distrusted the sex, but he was always a chivalrous opponent.
In recording from time to time some of the curious experiences and interesting recollections which I associate with my long and intimate friendship with Mr. Sherlock Holmes, I have continually been faced by difficulties caused by his own aversion to publicity. To his sombre and cynical spirit all popular applause was always abhorrent, and nothing amused him more at the end of a successful case than to hand over the actual exposure to some orthodox official, and to listen with a mocking smile to the general chorus of misplaced congratulation.
“You’re not hurt, Watson? For God’s sake, say that you are not hurt!” It was worth a wound—it was worth many wounds—to know the depth of loyalty and love which lay behind that cold mask. The clear, hard eyes were dimmed for a moment, and the firm lips were shaking. For the one and only time I caught a glimpse of a great heart as well as of a great brain. All my years of humble but single-minded service culminated in that moment of revelation.
Next: The Manual – The Manual, Vol. 1
Previous: Tim Maly & Emily Horne – The Inspection House: An Impertinent Field Guide to Modern Surveillance