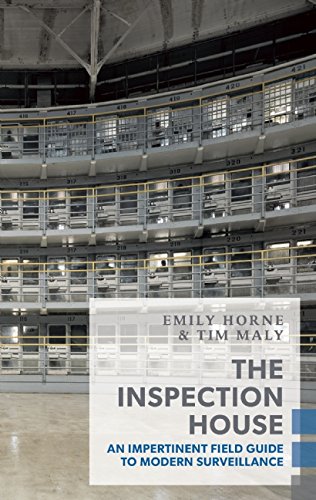 The Inspection House: An Impertinent Field Guide to Modern Surveillance

To immerse yourself in the conflict about prison labour is to feel completely unstuck in time. The arguments for and against prison labour and the rhetoric around the dispute have remained more or less unchanged over the last three hundred years.
One of the great pendulums of history swings between whether prison should be a place for rehabilitation or a place for retribution. Weirdly, no matter where on that scale a thinker finds herself, she can be in favour of prison labour. For the rehabilitators, prison labour helps people learn skills and reduces boredom. For the retributionists, hard labour is a fitting punishment. How work can be both of these things at once is rarely addressed.
No court would sentence a person to sexual assault, starvation, beatings, inadequate medical care or death by stabbing, and yet these incidents are common enough to be part of the pop-cultural mythology about what happens in prison.
The 9/11 Commission Recommendations Act of 2007 includes a mandate that 100 percent of all maritime cargo containers entering U.S. ports be scanned for radioactive material by 2012. To put that in perspective, in 2006 only about 4 percent of containers that made landfall in Port Newark were scanned, and a report penned by Rutgers University concluded that exceeding 7 percent would cause a massive spike in costs and time delays. So far as we can tell, the worldwide shipping industry responded to the law by quietly freaking out and then simply refusing to implement it. In 2012, the number of pre-scanned containers held steady at 4 percent. Homeland Security Secretary Janet Napolitano granted a two-year waiver, but there was no sign that things would be any better in 2014. Bentham could have warned Congress that 100 percent scanning was a bad plan. The whole point of the panoptic approach is that you don’t need 100 percent observation – it’s a bad use of resources.
It is a pervasive political myth that George W. Bush asked Americans to engage in mindless consumerism in the defence of freedom after September 11, 2001. Bush never directly asked Americans to go to the mall. On September 20, 2001, he did ask for ‘continued participation and confidence in the American economy.’ Writing for Time, Frank Pellegrini offered his own translation: ‘And for God’s sake keep shopping.’
A word about political geography: the City of London is not to be confused with London. London is a sprawling megalopolis with a population of 8 to 21 million people, depending on how you count and where you draw the edges of the urban area. The City of London is London’s ancient core, a 1.12-square-mile enclave defined by medieval borders, with a population of 7,375.
During elections, the businesses that operate in the City are permitted to vote (votes are apportioned by a formula that results in about 32,000 non-resident voters – the City is the last place in the U.K. that allows businesses to vote). The City also has its own police force, independent of the Metropolitan Police Service, which polices the rest of London.
Where London’s perimeter essentially traces the stone walls built by the Romans – enhanced and improved with twentieth- and twenty-first-century technology – the network of surveillance in Oakland is almost impossible to conceptualize in a purely physical metaphor.
The report noted that some cities and towns had subsequently requested money for CCTV systems, whether or not there was an identified need for those systems. In some situations, other less costly measures – like gates or lighting improvements – might have been more effective, but were not conveniently grant-supported. But when money is made available, it is difficult for cash-strapped cities not to jump at the opportunity to appear tough on crime to their citizens. Similarly, when Homeland Security made funds available for counterterrorism initiatives, it was impossible for Oakland to resist.
Calling the encampments fire or disease hazards absolved city officials and law enforcement of the otherwise-damaging pr hit of shutting down a movement with considerable popular support. The rhetoric of the 99 percent was catching on, and high-profile actors, musicians and activists were speaking to Occupy encampments around the world. To halt the encampments, Occupy had to be criminalized, and hygiene was the chosen method of control.
Smartphones can operate as vectors of surveillance and counter-surveillance. They are tools that allow corporations, governments and individuals to watch over the details of our lives, but they also allow us to watch right back. Our phones connect us to the network, which makes us collection points for data compilation. Mobile phones allow surveillance to be mutual, which is what Foucault predicted, particularly in his later work. Power operates multidirectionally, not simply from above. We watch, we are watched and we watch each other. Smartphones enable exactly the kind of interconnectivity that Bentham designed his panopticon to avoid. We are not prevented from communicating with one another as his prisoners were, but our communications are tracked and monitored.
Previous: Cover by Peter Mendelsund
Next: The Complete Sherlock Holmes (The Heirloom Collection) by Arthur Conan Doyle