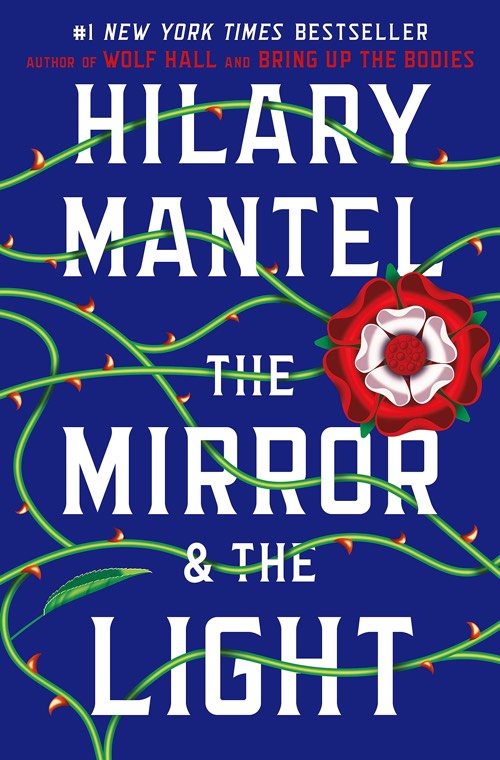 The Mirror & the Light

He, Cromwell, touches a finger to the metal. You would not guess it to look at him now, but his father was a blacksmith; he has affinity with iron, steel, with everything that is mined from the earth or forged, everything that is made molten, or wrought, or given a cutting edge.
He thinks, the cardinal would have known how best to manage this. Wolsey always said, work out what people want, and you might be able to offer it; it is not always what you think, and may be cheap to supply.
This is my real life, he thought, I have arrived at it now: but the moment you think that, you are due to take up your bundle again.
She is a young woman who needs presents, he feels. He wants to give her something that will outlast the pretty saddle horse, something to remind her of these last perilous weeks: the brink, and who pulled her back from it. He is thinking of a ring, engraved with proverbs in praise of obedience. Obedience binds us together; all practise it, under God. It is the condition of our living as humans, in cities and dwelling houses, not in hides and holes in the fields. Even beasts defer to the lion: beasts show wisdom and policy thereby.
A prince cannot be impeded by temporal distinctions: past, present, future. Nor can he excuse the past, just for being over and done. He can’t say, ‘all water under the bridges’; the past is always trickling under the soil, a slow leak you can’t trace. Often, meaning is only revealed retrospectively. The will of God, for instance, is brought to light these days by more skilful translators. As for the future, the king’s desires move swiftly and the law must run to keep up. ‘Bear in mind his Majesty’s remarkable foresight, at the trial of the late queen. He knew the sentence before the verdict was in.’
His spaniel turns in his arms as they walk in the twilight, her muzzle raised, her tasselled ears pricked; though she is small of her kind, her nose is as sharp as a hunter’s. There is always a current of disturbance, till a house settles about you: till your dog finds its way to the hearth and the sheets to the beds, the beef to the table.
Don’t look back, he had told the king: yet he too is guilty of retrospection as the light fades, in that hour in winter or summer before they bring in the candles, when earth and sky melt, when the fluttering heart of the bird on the bough calms and slows, and the night-walking animals stir and stretch and rouse, and the eyes of cats shine in the dark, when colour bleeds from sleeve and gown into the darkening air; when the page grows dim and letter forms elide and slip into other conformations, so that as the page is turned the old story slides from sight and a strange and slippery confluence of ink begins to flow. You look back into your past and say, is this story mine; this land? Is that flitting figure mine, that shape easing itself through alleys, evader of the curfew, fugitive from the day? Is this my life, or my neighbour’s conflated with mine, or a life I have dreamed and prayed for; is this my essence, twisting into a taper’s flame, or have I slipped the limits of myself—slipped into eternity, like honey from a spoon?
Seven Wise Men, he tells Gregory: here are their sayings. Moderation in all things, nothing to excess (those two are the same, wisdom can be repetitious). Know yourself. Know your opportunity. Look ahead. Don’t try for the impossible. And Bias of Priene: pleistoi anthropoi kakoi, most men are bad.
The king’s companions are prepared to march. So scented, the courtiers, so urbane: the rustle of silk, the soundless tread of padded shoes. But slaughter is their trade. Like butchers in the shambles, it is what they were reared for. Peace, to them, is just the interval between wars. Now the stuff for masques, for interludes, is swept away. It is no more time to dance. The perfumed paw picks up the sword. The lute falls silent. The drum begins to beat.
Then the blessing is read, beseeching St George that he will guide you through the prosperities and adversities of this world. That’s what we want, he thinks: help in prosperity. We can brace ourselves for the seven lean years. But when the fat years come, are we prepared? We never know how to take it when our life begins to be charmed.

‘Sometimes I think—’ Call-Me breaks off.

‘I agree with Uncle Norfolk. The higher you rise in the king’s service, the more you mention the low place you come from.’

‘The more others mention it, you mean. I am not ashamed of it, Call- Me. I never say my father taught me nothing. He taught me to bend metal.’

He is a busy man. He has not time to read every curt note life sends him. But he reads this one: ‘You do right to draw it to my attention. I will amend.’

Can you make a new England? You can write a new story. You can write new texts and destroy the old ones, set the torn leaves of Duns Scotus sailing about the quadrangles, and place the gospels in every church. You can write on England, but what was written before keeps showing through, inscribed on the rocks and carried on floodwater, surfacing from deep cold wells. It’s not just the saints and martyrs who claim the country, it’s those who came before them: the dwarves dug into ditches, the sprites who sing in the breeze, the demons bricked into culverts and buried under bridges; the bones under your floor. You cannot tax them or count them. They have lasted ten thousand years and ten thousand before that. They are not easily dispossessed by farmers with fresh leases and law clerks who adduce proof of title. They bubble out of the ground, wear away the shoreline, sow weeds among the crops and erode the workings of mines.
Next: Deborah Levy – The Cost of Living: A Working Autobiography
Previous: Yu Miri – Tokyo Ueno Station