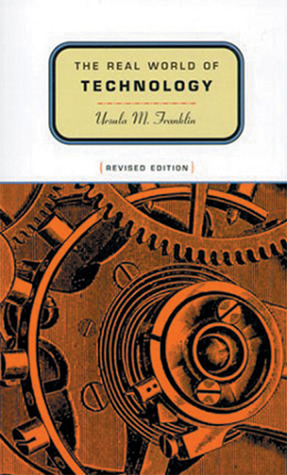 The Real World of Technology

A series of lectures about the role of technology in twentieth-century society (from a Canadian perspective) that’s still quite relevant and readable two and a half decades later. I read this based on a glowing newsletter recommendation and was happily interested in how Franklin works through the way technologies and social structures intersect, how nature and the ethics of labor relations have a say in the tools we build. I wish I had been in the audience for these lectures and I need to make time to listen to the free recordings of them.

As I see it, technology has built the house in which we all live. The house is continually being extended and remodelled. More and more of human life takes place within its walls, so that today there is hardly any human activity that does not occur within this house. All are affected by the design of the house, by the division of its space, by the location of its doors and walls. Compared to people in earlier times, we rarely have a chance to live outside this house. And the house is still changing; it is still being built as well as being demolished. In these lectures, I would like to take you through the house, starting with the foundation and then examining with you the walls that have been put up or taken down, the storeys and turrets that have been added, the flow of people through the house — who can come in, who can go into particular spaces.
The historical process of defining a group by their agreed practice and by their tools is a powerful one. It not only reinforces geographic or ethnic distributions, it also affects the gendering of work. When certain technologies and tools are predominantly used by men, then maleness becomes part of the definition of those technologies. It is for these deep-rooted reasons that it is so very difficult for women to enter what are now called “non-traditional” jobs. If engineers are male and maleness is part of engineering, then it’s tough for men to accept women into the profession.
I think it’s important to realize that technology defined as practice shows us the deep cultural link of technology, and it saves us from thinking that technology is the icing on the cake. Technology is part of the cake itself.
And today, the temptation to design more or less everything according to prescriptive and broken-up technologies is so strong that it is even applied to those tasks that should be conducted in a holistic way. Any tasks that require caring, whether for people or nature, any tasks that require immediate feedback and adjustment, are best done holistically. Such tasks cannot be planned, coordinated, and controlled the way prescriptive tasks must be.
You’ll remember that before the Industrial Revolution there was a fascination with numbers and population increase. It was a time when people like Malthus, Ricardo, and Adam Smith were preoccupied with the growth in numbers of the lower classes. Now, oddly enough, there was no such preoccupation with the growth in numbers of the rich. Queen Victoria, for instance, had nine children. The youngest was three when the Prince Consort died. She had thirty-nine grandchildren, and none of her children or grandchildren died in infancy, as was common at the time. The drain on the public purse, one would think, of thirty-nine grandchildren of Queen Victoria was substantially larger than of thirty-nine grandchildren of wives of miners or farmers.
One example may suffice here — it concerns the design of the parkways of New York State and the role of Robert Moses, in charge of much of the public works of New York State between 1930 and the late 1960s. His biographer, Robert A. Caro, refers to the bridges and underpasses of the famed New York State parkways. These bridges and underpasses are quite low, intentionally specified by Moses to allow only private cars to pass. All those who travelled by bus because they were poor or black or both were barred from the use and enjoyment of the parkland and its “public amenities” by the technical design of the bridges. Even at the time of Robert Moses, a political statement of the form “We don’t want them blacks in our parks” would have been unacceptable in New York State. But a technological expression of the same prejudice appeared to be all right. Of course, to the public the intent of the design became evident only after it was executed — and then the bridges were there.
The notion that maybe technology constitutes a source of problems and grievances and people might be looked upon as a source of solutions has very rarely entered public policy or even public consciousness.
Just as fewer and fewer unskilled workers are needed in a modern technological production system, a country now has little practical need for raw recruits to operate its modern technological destruction system. Abandoning compulsory military service is not so much a sign of peaceful intentions as it is a sign of galloping automation. But the old pacifist dream that there might be a war and nobody would come and consequently the war could not take place, is no longer valid. Wars can be started without calling on any additional people.
It is salutary to remember nature’s inescapable sequences, to not forget that the seed has to be in the soil before growth can begin, that the trees do not grow into the sky, the day has no more than twenty-four hours, and that the sun rises and sets regardless of political events. Those concerned with the advancement of technology, with finding new and more encompassing ways of doing things, often underemphasize the nonnegotiable embeddedness of human society in nature. No one, individually or collectively, can separate from the biosphere. You just can’t opt out of nature.
Next: William Styron – Darkness Visible: A Memoir of Madness
Previous: David Mitchell – The Bone Clocks